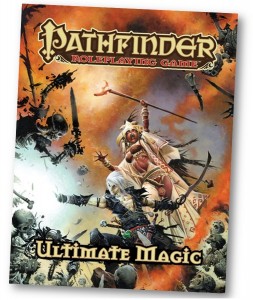 I’ve been a little quiet these past few days, real life, a bad cold and all that, but the blog must go on! This came out a couple of days ago and I somehow missed it. Paizo released part 2 of their Ultimate Magic playtest for the Pathfinder RPG, Words of Power.

It’s a nifty little alternate spellcasting system. I just gave it a read over and it is certainly different, but intriguing. I don’t know if I would use it on my current campaign, but I have an alternate campaign I’ve been tinkering with and such a system might be a fit. I’ll have to look at it in greater detail.

As ever I am thankful of Paizo’s open playtest. Remember they take your feedback serious and they have an area of their message board dedicated to this.

Hope you all enjoy this!

Is reading enough to review?