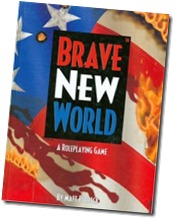 Just a few days ago I posted about DriveThruRPG’s upcoming POD service. As participant in the preview program I ordered Brave New World, an alternative history superhero RPG from Pinnacle Entertainment which – for whatever reason – is sold by Alderac Entertainment Group on DriveThruRPG. Perhaps one of my readers can shed some light on this. Please note that the game itself will not be subject of this post.

I ordered the Brave New World PDF+softcover bundle on December 8. On the 13th the book was shipped from the UK and was in my inbox only 2 days later. For POD and international shipping this was pretty fast. I have ordered from Lulu several times and usually I wait at least two weeks.

The sender address also revealed what POD service is actually printing the books. It’s Lightning Source, a POD service with subsidiaries in the US and the UK. That explains the pretty low shipping costs. And from what I’ve heard from a small press publisher at Gen Con, Lightning Source has a pretty good customer service and good quality for low prices.

And I have to admit that the quality of the softcover book is great. The cover and backcover are in full color while the interior of the book is black and white only. While flipping through the book I didn’t encounter  any printing errors. The binding does look sturdy enough to survive the daily wear and tear.

There are only a few pages where contrast may be an issue. Usually it’s fine but on some of the pages which are full-color in the PDF version but black and white in the printed book, contrast is pretty low. But this is only a very minor nitpick. Overall the print quality is as good as I’ve hoped and shipping times are pretty short.

I currently have no word on when the POD service will open to the general public and I don’t know how many products will actually be available for print. But I am sure that this new service will definitely be a boon to publishers and customers alike. And perhaps a lot of titles which have been out-of-print for many years (and only available in digital form) will finally be available in print again!

0
Ask The Readers / Other Systems / RPG