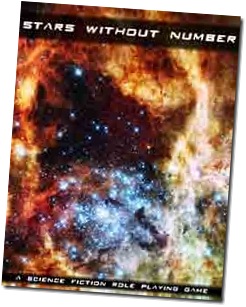 I’ve known of the existence of this game for quite a while now, but for some reason I just picked it up pretty recently. That’s why I don’t want to call this post a fully review.

Stars Without Number is a surprisingly well-made SF roleplaying game “influenced by the Old School Renaissance and partially inspired by the great fantasy role-playing game editions written by Tom Moldvay and Frank Mentzer”. Perhaps it was that mention of the OSR that put me off a bit initially.

Don’t get me wrong, I very much enjoyed Swords & Wizardry and I recently picked up Lamentations Of The Flame Princess but aside from that my interest in the old-school movement waned. It actually bothers me that people waste their time and creativity to recreate the 1970s’ fantasy RPG over and over again. But that’s the subject for another post…

Luckily Stars Without Number is different. While the system it uses has some resemblance to old-school D&D, it can pretty much stand on its own feet. SWN features three pretty broad character classes (Warrior, Expert, and Psychic), a sizeable number of Background Packages (from Adventurer to Worker) and a point-based psi system. Since the basic system is still pretty close to the d20 System, D&D veterans of all editions should get into SWN pretty fast.

Aside from the fact that it’s basic system is inspired by old-school D&D, Stars Without Numbers feels like a modern game, both in presentation and rules. Although the layout isn’t as fancy as some other games I’ve seen lately, it’s clean and has a good readability. The artwork is of a mixed quality (probably because it’s stock art – I recognize a few pieces I bought myself), but it usually fits the genre well.

Aside from the rules needed to create characters and run the game, the GM gets quite a lot of tools for his own games. There are rules for World, Faction, Adventure and Alien Creation, a Xenobestiary and a fully fledged out sector for you to play in. The author didn’t forget simple but effective Starship design rules either.

The 210-paged PDF version of Stars Without Numbers is free and can be downloaded from DriveThruRPG. You can also get this fine game as a softcover or hardcover book through DriveThruRPG’s POD service, if you prefer the hardcopy over the digital download. The printed books set you back $19.99 or $24.99 respectively.

SWN is definitely worth a look if you are into science fiction RPGs. The game supports various sub genres and gaming styles, so it should be pretty easy to adapt it to almost any campaign.