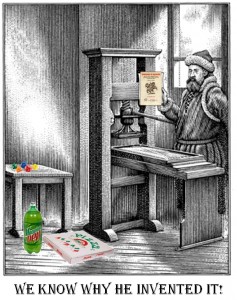 I don’t know about you, but I love collecting them. Ever since I got my first word processor I cherished the possibility of changing the font depending on the purpose of the document I was writing. For a big period in my gaming life one of the things I enjoyed the most was creating character sheets for the games I was playing, (this was in that bygone age before high speed internet connections and great collections of pre-made character sheets like the Mad Irishman, kudos!) and selecting the right font from that seemingly endless collection of fonts displayed against the monochrome background of my monitor was a key part of that process!

Actually, my love for fonts can be traced back to my early gaming days. Perhaps many of you first discovered the idea of fantasy script with Tolkien, but while I fondly remember reading the novels I can’t say I was particularly taken by the funny looking script. The first time I made the connection that a made believe fantasy language could have a script corresponding to our own alphabet was reading the old Forgotten Realms grey box, in the book there were illustrations of the scripts of Faerun with the equivalent letters in the Latin alphabet and the Arabic numbers (that’s how I remember it and I’m not searching for the book at this our so do not thread over my memories!). 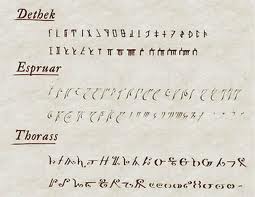 Something clicked right there and the concept of fantasy and science fiction alphabets were unleashed on my young and impressionable mind. That very same day I fired up a greeting card making software (yes we had such things back then in the olden days before the internet) and used the Cyrillic alphabet for a little greeting card for a sci-fi setting I was beginning to develop. That little card eventually became a full-fledged campaign, but I digress, that’s a post for another day. From that day on I began collecting fonts. At first I would by the font collections and install them on my archaic computer. Eventually Al Gore gave us the Internet and fonts were free to travel the Interwebz and into my gaming handouts.

Using a particular font can spruce up a hand out, set the mood and add whole new elements to even the most boring or writings. Well maybe not that last one but you get my point! I have selected fonts to represent each script used in my homebrewed fantasy world (which according to my players has TOO MANY languages and dialects… about 70!) and actually prepared a handout which illustrates the corresponding letters in the fantasy script to our modern alphabet. This was done with the intention that I could actually write messages in the fantasy script and hand them to players so they could translate them. Then I got to thinking, these languages would probably have different grammatical rules and I started tinkering with that… But I am no linguist and certainly no Tolkien so that’s a project that remains unfinished.

That however has not deterred me form continuing to download fonts. What are my favorite sources? Well glad you asked:

This list is FAR from exhaustive! There are a lot more sources of free fonts out there, and many fine commercially produced fronts out there. Be sure to search for fonts that meet your needs. I invite you to share your sources of fonts, and tell us how you use them for your games. I hope this post reminds you is not just what you write, it’s how it looks!

This is Highly Disturbing