Back in 1998 I was just beginning high school (my apologies to any of you who now feel particularly old), and a friend of mine introduced me to this crazy little CCG called Middle Earth: The Wizards by the sadly fading Iron Crown Enterprises. I was well-versed in collectible card games at this point in time; I’d been playing Magic: The Gathering since the Revised Edition, played Netrunner whenever I could find someone with cards, and—though I am loathe to admit it—even spent some time attempting to convince a few friends to get into the ill-fated Sim City CCG.

MECCG was rather different from these, as I recall. You had a deck, sure, but from it you would assemble parties of characters, and they would travel to various locations around Middle Earth, collecting artifacts and attempting to find allies that would assist them in the eventual battle against Sauron. It was pretty epic stuff.

Unfortunately the game ceased production not long after I started playing. I had a reasonable collection of cards, but I’m uncertain what happened to them. I very well may have thrown them away when I moved to college. File that under Things I Greatly Regret.

I skipped The Lord of the Rings Trading Card Game released by Decipher. Art has always been a major factor for me in CCGs, and photos from the movies just don’t cut it.

On April 20th, Fantasy Flight Games released the fourth game in their Living Card Game format: The Lord of the Rings: The Card Game. I am a big fan of the LCG format, where each month a small, fixed set of cards is released as opposed to large sets in random booster packs. I’m also fond of FFG’s board games, which are pretty high-quality productions and good for many distracting evenings. Given these factors, I eagerly picked up the core set. 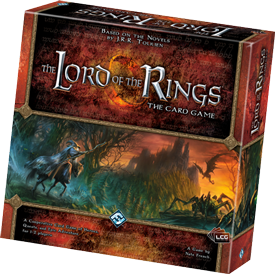 If you’ve played any of the other LCGs by Fantasy Flight, the production values are rather similar. You get excellent painted art work on glossy cards and an easy-to-interpret layout. There are four 30-card decks for the players, along with 84 Encounter cards that will be combined according to the demands of each of the game’s three scenarios.

To quote a mermaid I once knew, you also get whosits and whatsits galore. There are three types of cardboard counters you will spend fifteen minutes gleefully poking out of their sheets, and two “Threat Trackers,” which are basically spinning life counters that you assemble from cardboard circles and little plastic bits. They are pretty neat.

The rulebook is big, too. Most CCG rulebooks fit in a deck box, but this one is on full-sized glossy paper, complete with full-color illustrated diagrams and examples that will make learning the rules a very straightforward process. As much as I did love Middle Earth: The Wizards, I swear the tiny card-sized rulebook it came with was thicker than the deck of cards you got, and a contributing factor to why I must now wear corrective lenses. You will not experience similar problems with The Lord of the Rings: The Card Game.

The Lord of the Rings: The Card Game is a cooperative game, which is a huge departure from most (well, all) other collectible card games I’ve played. Each of the four decks that come with the game contain 30 cards, and ultimately you will want to increase this to the “tournament” size of 50 as more expansions become available. You can also distill the four decks down to two with a little work, though for the time being it helps to acquire an extra set if you’re the deck-building type.

Interestingly, you can also fly solo. The solitaire version of the game is exactly the same as the multiplayer version, but your strategy will be a bit different and the difficulty ramps up a fair amount.

So there are four decks, and each is built around a “sphere.” You have Leadership (purple), Lore (green), Spirit (blue), and Tactics (red). Each sphere has its own particular strengths and weaknesses, and in order to conquer the scenarios of the game you will want to have a good blend.

You will recognize several familiar faces among the initial heroes that come with the game: Aragorn, Gimli, and Legolas. There are also other important characters from the books like Éowyn and Glorfindel. Finally, Fantasy Flight Games even has a few characters of their own, like Eleanor and Beravor, which I am led to understand made an appearance in the Middle Earth Quest board game.

The goal of the game is to work your way through a number of quest cards, which is usually three. There are three scenarios included with the core set, and each offers unique challenges. You want to reach your goal before all of your heroes die, or all of the players reach 50 “Threat,” which represents how aware of your efforts the forces of shadow are. 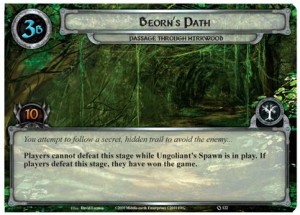 All of the encounter cards have a symbol on them, and based on the scenario you choose, you form the encounter deck by using all the cards that share a symbol with the ones on the quest cards.

The encounter cards represent the threats of Middle Earth. Vicious enemies, dangerous  or mysterious places, and chance occurrences that befall your party. Each round you will reveal cards from the top of this deck, and the rules of the game govern what you do with them. Locations must be explored, enemies will attack players whose threat is high enough, and bad things… well those just tend to happen

I could try to explain the rules here, but let’s face it, that would bore you to tears. Instead  I recommend you check out the much more engaging gameplay videos released by Fantasy Flight Games.

Managing your resources is key. You must exhaust characters in order to quest, defend, and attack, so by committing them to one action you are effectively barring them from performing another later in the turn. Sometimes you must be willing to make sacrifices. While you are doing this, you are hopefully accumulating progress tokens on the quest cards. When you reach a certain amount, you go to the next card. Get to the final card and complete its requirements and you win! Sounds easy, right?

Hahahaha. One thing I really like about the game is that it is a challenge.

The Forces of Shadow

The game is great fun, and I am a-twitter with anticipation for the first Adventure Pack due for release in a month or so. That said, all that is gold does not glitter. There are some issues with the game at the moment. A few of the card interactions are not exactly clear from the rules or the card text, which is being discussed on the game’s forums, and while FFG is pretty good about releasing clarifications no such exist at the time of this writing.

Also, for you venturous deck-builders out there, it is currently difficult to make a viable deck that does not involve the Leadership sphere. In order to play a card from a given sphere, you must spend resources from a hero of that sphere to pay for its costs. If you have multiple heroes of that sphere, you can split the cost between them. But if you only have, say, one Spirit hero, you normally only get one Spirit resource per turn, so playing a 3 or 4-cost Spirit card becomes much more difficult. Leadership has the ability to accelerate this, and thus at the moment is absolutely vital. No doubt as the card pool increases we will see more solutions to this problem, but it is what it is.

Despite that, I highly recommend picking up the game. The box says 1 to 2 players, but if you are willing to use the 30-card decks as-is and use two 10-sided dice for the other two players instead of the Threat Trackers, you can get a full 4 players worth of fun from the core set by itself. In the coming months I fully expect to see the game become much more dynamic, and there will be organized play opportunities if you are in to that kind of thing.