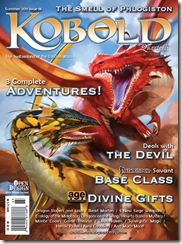 The latest issue of Kobold Quarterly has been released today and as always it contains a lot of great material for you game. The 100-paged magazine contains articles for all of the major fantasy roleplaying games including Pathfinder, D&D 4th Edition and AGE.

Some of the highlights for me are “Gifts of the Gods”, an article about Divine Talents in AGE written by Steve Kenson, the Savant Class for Pathfinder designed by Ryan Costello Jr., “Elementary, My Dear Wizard” by Paul Balham, which gives you some guidelines on how to design rock-solid murder mysteries, and “The Heroic Flaw”, an article by Philippe-Antoine Ménard, which gives us tips on how to easily add more depth to our characters.

In addition to a lot of interesting articles, this issue also contains no less than three adventures. If you’re playing any of the supported games, you’ll be able to get a lot of useful material out of the latest issue of KQ. You can get KQ #18 in print or PDF directly from the KQ store.