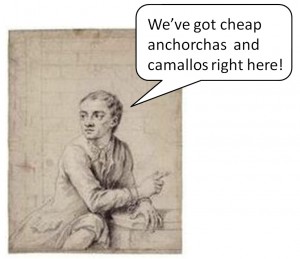 Tell me if this has even happened to you. You sit down to play for the first time with a group of gamers who’ve been at it for a while (be it a few months or many years). As the new guy or gal there you may feel a little trepidation, there is of course the expected period of adjustment, and then someone uses a phrase that has no meaning for you and everybody start laughing. A common word to which you attach no particular importance elicits a reaction from the others around the table. If you can identify yourself with this experience then you have witnessed what I like to call role-player’s cant!

True many of us (well at least in similar age groups and from similar cultures) may share some references we throw around at the table. Like brushing off a terrible critical as “just a flesh wound”, calling a particularly deadly weapon the “holy hand grenade of Antioch” or calling any mysterious chivalrous order the “Knights who say Ni”… Thank you Monty Python, we are in debt to you! But this is not the type of patois I’m thinking about. I’m referring to the words, phrases and concepts that form around a tight knit group of friends over a period of time.

I began to think about this after writing my post on “puerco papers”. This is a concept that I associate with my immediate group of gamers and I know that when I have used it outside that group I have always had to explain what I’m referring to. Daniel (@Highmoon) left a comment on how I was introducing our very own terminology into the greater gaming community, and that got me thinking. I asked around my friends and players for suggestions, and began to compile the words and phrases we have come to use over the years in our groups. Let me share some with you…

An important warning, many of these phrases use a mixture of English and Spanish, lovingly called Spanglish. As I wrote before, I live in a predominately Spanish speaking country and we game in a mix of both languages. This will be evident in the following list; I’ll try to translate them as best as I can.

1. Chiclán: Used when dice are improperly rolled, land unevenly or fall from the table. Usually uttered when a particular roll is not valid.

Where it originates – This is probably the oldest term in the list. To the best of my recollection it was coined by my friend Luis Miranda in our old AD&D 1st edition games. Luis was among the second group of people I actively gamed with, my friends from school (the first group being my neighbors with whom I gamed for the very first time) and we played for days on end. Some summers we played almost every day. What about the word, what does it mean? Well Google showed me there is a place called El Chiclán in Nuevo León, Mexico, but that’s not what the word means for me. I am not sure if this is the generally accepted term in Puerto Rico, but to me it means a male with just one testicle. What does it have to do with dice? No idea! But it stuck and continues to be used over twenty years later.

2. Chuklin: Used when a roll is ineffectual, no matter the bonus that will be applied to it. For example the player may say, “My first level fighter will use his bow and arrow to shoot the dragon thru the nostril and into the brain for an instant kill.” To which the GM replies, without waiting for the dice to even stop rolling, “Chuklin! You fail…”

I know who came up with this word, or at least from whom I heard it first. My friend Sammy, who I have known for a long time (he used to have a gaming store and sold me my very first RIFTS game books, back when he used to have hair) but did not get to game with until a few years ago. He was infamous for using it at his table when he Game Mastered. I quickly adapted the word, and when we went to Gen Con in 2007 I had a set of D6 made with the word chuklin on all sides. That way you can’t be accused of at least not rolling for it.

This refers to the avariel PC of my friend Pierre (who will appear in this list again) who was obliterated when he failed two saves while wearing a Helm of Brilliance in an old AD&D 2nd edition game. I wrote about it in the blog before, on a post about character deaths, so I will not rehash the story. Needless to say, when someone dies a horrible death someone has to use the phrase. 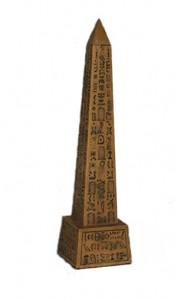 4. ¡El obelisco! (The obelisk): Typically a reference to a non-existent plot point or misinterpreted clue.

This one also goes out to my friend Pierre. I run pretty complex campaigns. I’ve been accused of having flowcharts to keep track of plots (guilty!) and players needing them to keep track of them (at least one tried). Pierre is a dear friend and great player but he sometimes gets lost on the plot. One night while arguing the finer points of a difficult situation in the game he asked, “But where’s the obelisk?” Players and GM alike gave him befuddled looks. There was no obelisk, none had even been mentioned. So whenever someone just doesn’t get a plot or gets confused about what’s happening, we ask them if they know where the obelisk is.

5. Camallo: Any mount or beast of burden available to the characters

Camallo is a mix of two words “caballo”, horse, and “camello” camel. The PCs were about to embark on a overland trip into the desert and I asked them if they wanted to get camallos. That’s a common problem for me, I speak too fast and in my excitement I mix up some words. Strangely this one stuck! Now every time they are going to buy some ridding animals someone has to mention the option of getting a camallo.

This one was just a mistake, another example of speaking too quickly. It also stuck and I get reminded of it often.

7. Thoulian!: Uttered when a character falls for an easy rouse.

This one needs a little context. Thoulians are nomadic tribesmen in one region of my campaign world. My friend Piwie was playing a character from these tribes and the party was fleeing over the rooftops from enemies giving them chase. They split up and as Piwie’s character was making his escape and his pursuers could not find him one of them shouted out “Thoulian!” Piwie heard it and had his character stop and look back to see who was calling. Needless to say his pursuers pushed their advantage. Now Thoulian is code word for when a character is easily tricked or bamboozled. 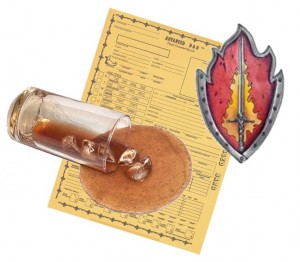 8. Tempus be praised: Spontaneous praise to the god of war of Faerun whenever a drink or other liquid is spilled at the table.

My friend Emilio always spilled his drink at the table. Well his or anyone else’s. It was almost tradition to have your character sheet, or GM notes, baptized by Emilio. For a while he played a cleric of Tempus and whenever he would cause one of his accidents we’d say “Tempus be praised!” He moved away and no longer plays with us but his memory lives on whenever someone spills a soda.

9. “Fuerza magnífica” (Magnificent Strength): Used to refer to an extraordinary power or ability.

This is also of my doing. We were playing a Heroes Unlimited campaign and my friend Pierre was playing a character with super strength, I think it’s called enhanced strength in the game if memory serves. We had visitors that night, our friends Ray and Colo were watching while we played;  in the middle of the session the boat the players were traveling on was sinking. I meant to ask Pierre if he was using his super strength to keep the boat afloat but for the love of me could not utter the words. So I asked him, “¿Vas a usar tu fuerza magnífica?” (Are you using your magnificent strength?) He looked at me with a look of complete confusion (he was probably wondering where the obelisk was) and I just remember Ray laughing his ass off! And thus was “fuerza magnífica” born.

This one is all Lao! My friend Lao was the first person I heard using the term, it’s most useful when the players ask the GM, “What is that monster?” The GM rolls or determines they have NO idea what it is so the GM replies, “It’s a Mono Calchicho!” Shorthand really, plain and simple…

Those are just a few example of role-player’s cant around my table. I hope I remember all these stories correctly. It’s been some time. If not those involved are welcome to refresh my memory.

Now what I’d like to know is what special words or phrases you use with your gaming group. Feel free to leave a comment…