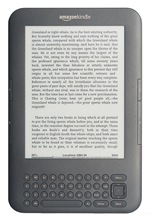 Yesterday I finally got my Kindle. For quite a while I have been pondering whether I should buy one or not. Last August I bought an iPad and actually thought it might double as my ebook reader as well. But although I use it a lot to view PDFs I actually never used it to read whole novels using iBooks or a similar tool. A couple of months ago my girlfriend – much to my surprise – bought a Kindle. So I actually had the chance to have a closer look at the device and I especially liked the electronic paper display. It looks pretty close to real paper and you can actually read comfortably in direct sunlight. So after long consideration I ordered the Kindle Keyboard a couple of days ago.

I mainly intend to use the Kindle for what it was designed which is reading normal ebooks. But as a gamer I also look for ways how I can use this new device at the game table. I’ve done some research and found out that a few roleplaying publishers have started to release their books in ePub or Mobi formats. There are also free ebook versions of the Anima RPG and the German translation of FreeFATE. If you have a long trip on the plane or train ahead of you, you might want to put some RPG book on your Kindle to give it a readthrough from cover to cover. And that might actually work pretty fine when you have a version of said rules optimized for an ebook reader.

I even tried reading a PDF on my Kindle and was surprised that it worked better than I expected. But that doesn’t mean I would recommend it. If the PDF was created in a digest-sized format it might actually work, but usually the font size is just too small to read anything comfortably. Zooming is possible but not that user-friendly. The Kindle is no iPad, folks. In addition to that I am pretty sure that very artwork-intensive PDFs might be too much for the device.

Since you can copy your own documents easily to the Kindle, you could for example copy all the notes you need for the game you’re running to the Kindle. And searching for something in actual ebooks (not PDFs) is pretty reliable, so you might actually use the Kindle as an alternative to flipping through a physical rulebook when you want to look up some obscure rule. I am sure some Kindle owners and D&D 3.x/Pathfinder players have a copy of the SRD on the device.

So what are your thoughts on that subject? Do you own a Kindle or a similar ebook reader and have you used it successfully at the game table? Please share your experiences in the comments below!