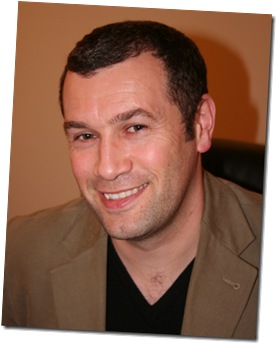 When it comes to soundtracks for pen & paper roleplaying games my favorite composer is definitely James Semple. He and his team have created several awesome soundtracks for Pelgrane Press’ series of GUMSHOE games including Trail of Cthulhu and Ashen Stars. A while ago, after finishing my review of their latest work “All We Have Forgotten”, it occurred to me that it could be very interesting to ask James a couple of questions about his work. I contacted him over Twitter and he gladly said yes. So, without further ado I am proud to present our interview with the composer and multi-instrumentalist James Semple.

Stargazer: Thanks again, James! It’s an honor being able to do an interview with you. Even though I already gave our readers a short introduction on who you are, could you please tell us a bit more about yourself and your work? What non-gaming projects have you worked on? How did you become a composer in the first place?

James: Hi Michael, it’s a real pleasure to be interviewed here. The short story on me is that I’ve been a gamer since I was about 10 years old and I’ve been a fan of film scores since Star Wars was released at the cinema. It really had a huge impact on me and ever since then I have always loved big orchestral film scores. For many years I played lead guitar in various rock bands but for the last 6 years I’ve seriously been focusing on media composition and getting back to my first love of orchestral film music. Outside of composing for tabletop RPG scores I’ve worked on videogame music (The Witcher: Platinum Edition) and feature film scores.

Stargazer: Soundtracks especially created with pen & paper roleplaying games in mind are pretty rare and more often than not they are not very good. So it’s no surprise I was blown away by both “Dissonance” and “Four Shadows”. Were those two albums your first pen & paper RPG soundtracks? And did you approach Pelgrane Press with the idea or was it the other way around?

James: I think some of the guys out there have done some really wonderful work. One thing to bear in mind is that the software we use to create these scores has moved on dramatically in the last few years. This means that the newer sounds are far more realistic. I’m a huge fan of Alex Otterlei’s work and he’s a real talent and a genuinely nice guy as well. Four Shadows was the first RPG music I created and it was quite a learning experience for me. I was gaming regularly at the time and we were using music a lot. It seemed obvious for me to write something but I wanted to align myself with a specific brand and game. I had already briefly spoken with Simon Rogers at Pelgrane Press so I just contacted him again and he was very positive and supportive. I was playing in the horror genre already and I felt with Pelgrane being in London we could chat face-to-face and it would make for an easier working relationship. Simon visited my studio and I feel we’ve always worked very well together. He knows what he wants and loves using bespoke music in his games. Simon and Pelgrane are all about producing high-quality products and that appeals to me a lot.

Stargazer: In the introduction I mentioned that you didn’t work alone on the “Eternal Lies Suite” or “All We Have Forgotten”. Can you please tell us a bit more about your team and how you worked together to create the final product?

James: One thing about composing is that it’s often a lonely task. I love working with other composers on projects. I’ve used a team for quite a while now and it’s generally worked well for me. My main co-writer is Marie-Anne Fischer who works on nearly every one of my projects. In the cases of these scores I wrote the main themes and then gave directions on what I wanted for the various tracks. Sometimes I would be very specific but other times it might be as open as “I need an ambient track and I think you should reference this theme”. They do a great job and have really helped me to deliver high quality music within reasonable deadlines. It’s good for the customer because I guarantee a certain level of quality with my music and I know my team can always deliver quality.

Stargazer: How is writing music for pen & paper games different than composing the score for – let’s say – a motion picture?

James: Over the years of writing for RPGs I’ve learned a lot about what is useful and what isn’t. Music for films is nearly always actually ‘written to picture’. This means that I actually write music to the scenes and sometimes to time up with specific events. I am working to a scene that has been filmed and edited. With RPGs I am working to a concept more often than not. For the most part it’s about setting an appropriate mood without being too attention-grabbing. I also can’t really expect a gamesmaster to spend his whole time acting like a DJ tailoring music to the scenes. What we did with Eternal Lies was break it down into three types of music: ambient, action and stings. The ambient music is the classic mood music. Often this would be specific to a location to help set the scene but generally it could easily be left to loop. The action music is for combat or chase scenes and is generally traditional action music also designed to loop. Finally the stings were designed to be played for specific momentous occasions in the campaign. We felt that one or two of the biggest moments could be used for triggering a specific track just to really add emphasis.

Stargazer: “Dissonance” and “Four Shadows” are pretty short, especially compared to the “Eternal Lies Suite”. Are there plans to expand on these albums in the future? Personally I would love to see an expanded version of “Dissonance”.

James: I would look at these two as proof points before we felt comfortable taking on an epic like Eternal Lies. I really enjoyed writing Dissonance (the Esoterrorists music) as I felt I had a blank canvas to really craft my own sound there. I know the guys enjoyed it and it’s currently being used as the theme for the award-winning podcast, Ken and Robin Talk About Stuff. One of my next assignments is to write a suite of music for Night’s Black Agents and that will have some similarities. I think you’ll enjoy that. Also there are still 12 bonus tracks for Eternal Lies which will be released with the full campaign plus some celebrity voiceover work from Wil Wheaton. It’s going to be epic!

Stargazer: From what you’ve told me before, you have been playing roleplaying games for about 30 years. What games have you played over these three decades and how did you use music in your games?

James: Wow … I’ve easily played over 40 systems in that time. I really love playing Cthulhu games just because I think they bring in new players easily and are often the most atmospheric and evocative. Right now I’m playing The One Ring which I think is a fantastic system. I also have played a lot of superhero and Star Wars games. Both great fun genres! In terms of using music I don’t think I’ve ever done anything too groundbreaking, just using it as a loop in the background. I did write Anagnorisis (from Four Shadows) for a very specific scene in my Beyond the Mountains of Madness campaign and that was fun to actually truly score a roleplaying game.

Stargazer: If you could pick one game you would love to write a soundtrack for, which game would it be and why?

James: I think if I was given an opportunity to write a D&D soundtrack it would be very hard to turn it down. I love fantasy scoring and it would be great to write some official music for the biggest game out there.

Stargazer: May I ask what you’re working on right now?

James: I’m currently working on music for Robin Laws’ new game, Hillfolk plus a suite of music for Night’s Black Agents. It looks like I’ll be writing some new music for 316 – Carnage Amongst the Stars early next year. That’s going to be fun with some heavy military sounds plus electric guitars. The rest of my work is external to this market but currently includes another feature film, mobile games and a pitch for a very big company, so fingers crossed there!

Stargazer: Thanks again for taking your time to answer our question. Is there anything else you want to tell our readers before we conclude this interview?

James: Thank you Michael for giving me such a wonderful opportunity to discuss roleplaying music.