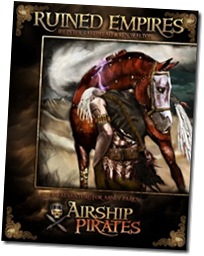 Ruined Empires is an 43-paged adventure for Abney Park’s Airship Pirates (read my review here) written by the games’ authors Peter Cakebread and Ken Walton. And as in the rulebook Abney Park’s Robert Brown was responsible for the Cover Design and overall layout.

The adventure was designed for a party of three to six players and serves in my opinion as a perfect introduction into the post-apocalyptic world of the game. I don’t want to give too much away about the plot of the adventure, but rest assured there’s something for almost everyone in the adventure. The story begins in Isla Aether, where they players are given the task by a powerful patron to find a treasure for him. But when they return victoriously things in Isla Aether have changed… and not for the better, when the players are concerned.

The adventure is split into three parts and at the beginning of the book the GM gets an overview of what is supposed to happen in each of the parts. After that each part is described in detail. NPCs are listed close to where they are mentioned in the text, so you don’t need to flip through the book to find their stats.

What I also like a lot is that there are quite a few maps included. They are not overly fancy or anything, but they do their job well. In too many adventures you have to guess how the places the story is set look like, but Ruined Empires’ maps do a great job giving you some hints on what the locations look like.

A big plus in my book is the fact that the adventure is full of interesting and often flamboyant characters. That’s exactly how I expected characters in Airship Pirates adventure to be and Ruined Empires doesn’t disappoint here. There are a lot of opportunities for the players to roleplay their characters, but there’s also a lot of action, especially in part two.

Even though the adventure is a railroading the story a bit, it still leaves a lot of opportunities for veteran GMs to do things their way. I haven’t had the chance to run the adventure myself, but I am sure it should be enjoyable for both players and GM alike.

You can get Ruined Empires as a print+PDF bundle from Cubicle 7 for $14.99 or as a PDF from RPGNow for mere $7.99. Ruined Empires is a solid Airship Pirates and if you are planning to run a campaign, it definitely is a perfect way to introduce your players to the world.

What about Open Gaming Monthly? A short review…