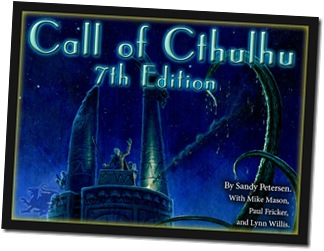 It’s no secret that I have enjoyed playing Call of Cthulhu for many years now. Even though the rules are a bit dated and somewhat clunky, Call of Cthulhu feels like an old pair of shoes. They are not looking that great anymore, but they are extremely comfortable. That’s why I come back to Call of Cthulhu again and again, even though I think games like Trail of Cthulhu or tremulus might actually be superior in many ways.

Recently Chaosium has announced a 7th Edition of the CoC rules. I was actually very surprised that they are planning to make some major changes to the rules. The system powering the game hasn’t changed much since 1986, so this is quite a big deal. I haven’t followed the development of the 7th Edition that closely, but from what I’ve heard attributes are ranked from 01 to 100 now, skills rolls can now be “pushed”, and there’s now a mechanism in place that helps to avoid the awkward situation when the player characters miss all the clues. And they finally came up with new rules to get rid of the “opposed roll table”. Yay!
It doesn’t seem as if Chaosium is trying to fix things that aren’t broken and old adventure modules should still be more or less compatible. As a long time Call of Cthulhu fan, I am pretty sure I’ll get me a copy of the new rules as soon as they are out.

What I am not too fond off is the Kickstarter project Chaosium is currently running to fund this new edition of Call of Cthulhu. It’s basically just a regular preorder. There are no stretch goals and the pledge levels are uninspired. A huge part of the “Kickstarter experience” for me have been interesting stretch goals and to a lesser extent exclusives. The only exclusives listed on the CoC KS are two boring t-shirts. Chaosium, really, is this the best you could come up with? If I had to sum up the CoC Kickstarter in one word, I’d probably pick boring.

That said, even though I probably won’t back this project myself, I still hope Call of Cthulhu 7th Edition will be funded. It’s just that I don’t see a reason why I should invest my money now. I’ll probably wait till release and then get my copy of the two new rulebooks at my favorite online game store. What are your thoughts on that subject? Please share your thoughts below.

Ask The Stargazer: What is the best Fantasy RPG?