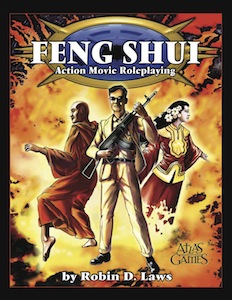 Last Friday I had the chance to play in a game of Feng Shui. Feng Shui is a roleplaying game from the mid-1990s inspired by Hong Kong action movies. If you enjoy watching movies where martial artists defy the laws of physics regularly or where gunmen jump through the air blasting away with a pistol in each hand, this game is for you. But instead of being a generic HK action cinema RPG, Feng Shui has an original and quite unique background setting.

The players are fighting in a secret war that is waged today, in the past, and even the future. Several factions try to get hold of special Feng Shui sites that grant its owners tremendous power. Who controls all the Feng Shui sites controls reality. The setting has a limited form of time travel that allows players and NPCs to travel to four points in time: now, 1850, 69, and 2056. The year 69 is an age of magic, heavily inspired by the Wuxia genre. In 2056 a totalitarian government rules about Earth which makes use of cyber-enhanced creatures that they brought in from the past. If you get the impression that Feng Shui’s setting is pretty weird and over-the-top you’re totally correct.

Luckily the rules system is pretty easy. The core mechanic is rolling d6-d6, add your Action Value (which is the sum of the relevant skill bonus + the attribute bonus) and compare it to a difficulty value set by the GM. Combat uses an easy tick system which works extremely well and surprisingly doesn’t slow things down. Special abilities come in the form of “schticks” which can be anything from martial arts maneuvers to  creature powers or sorcery. While the core mechanics are pretty easy and straight forward, the schticks can easily make things more complicated fast – especially for the GM not so much for the players. Each character usually has a small number of schticks in addition to a few regular skills.

Apropos characters, each player picks on of the character types during character creation, which is basically a complete character template. Usually you just have to choose between a few options, distribute a few points, and you’re ready to go. Even with a dinner break character creation took us only about an hour and a half, and neither of us had played the game in the past. Most character types can come from several different ages, and a Big Bruiser or Ninja from 69 A.D. is pretty different from one from the 1990s or the near future.

What I liked the most about Feng Shui is how it treats named and unnamed characters (aka mooks). Mooks are usually very easily killed and there are several schticks that make disposing of mooks even easier. Named characters are much harder to deal with. In the case of mooks you even disregard damage caused. If you attack result was good enough the mook is down. Period. During play I really felt like I was the star in a HK action movie, which was pretty awesome, BUT I also wished mooks would pose a bit more of a threat. If I remember correctly, the mooks actually never even managed to hurt us. Named characters are a totally different story. But even then Feng Shui is not particular deadly.

In my opinion Feng Shui does a great job to “simulate” the feel of Hong Kong action movies. If the players and the GM are into this particular genre, they should definitely give Feng Shui a try. The rules have a couple of minor issues and sometimes feels a bit rough around the edges, but that’s probably because of the rules’ age. Atlas Games is currently asking players to run the introductory adventure as a playtest and then provide some feedback. Our game on Friday was part of this playtest and I hope they’ll introduce a couple of changes and updates to the game before they rerelease it.