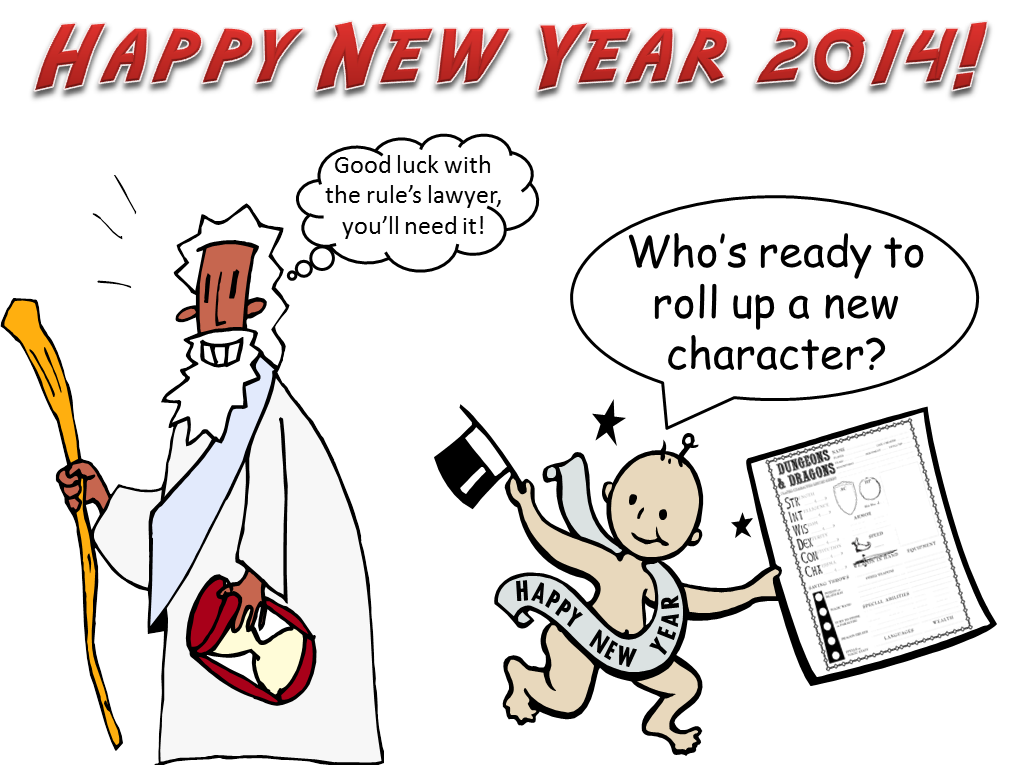 Year in review posts, they’ve been done before… And I’ll do one gain!

2013 was a great year for me! I finished my MA in Education accomplishing an important personal goal. It did take some sacrifices; mainly it meant being less active here in the blog and online in general. I remained active with Puerto Rico Role Players, but even there I was not as fully engaged as I usually am. As much as I would have liked to go to every local convention we were invited to I just could not manage to spare the time from my studies.

One thing I did not stop doing was gaming. Role playing games have been a constant for a quarter of my life and they are my main form of entertainment, my escape valve, the calm in the storm. Other people visit a doctor, or play the slot machines (that’s my mom’s theory at least!), I get together with friends and roll dice. RPGs are my therapy!

At some rough spots in my life I’ve considered taking a break from gaming, or outright stopping, but when I take a hard look at it, I realize games are such a big part of who I am, that I’d miss them. I make arrangements, I accommodate, and the game goes on. That may mean I take a couple of weeks off, play something else that takes less prep, but I don’t abandon gaming. Not judging anybody, some people may need the break; this is just how it’s worked for me so far. Who knows what will happen in the future.

So besides studying like a madman, and almost disappearing from the blog, what else did I do in 2013?

In my weekly game we continued my long running fantasy homebrewed campaign. We had actually come back to it in late 2012, after an almost two year hiatus during which we had played the Dawn of a New Age supers campaign, using Mutants & Masterminds 3rd edition. This swashbuckling pirate themed campaign, using the Pathfinder rule set, started back in June 2009 and has gone through some serious character and player changes. Of the original six players only two remain, and only one of the characters that begun the campaign. With so much turn over I was unsure if it would take off once again…

I like planning my campaigns somewhat like arcs on a TV series, and to take small breaks, typically twice during the campaign’s life, to play some other genre for a bit. Most times these breaks last anywhere from 3 to 6 months, and the players are usually anxious to get back to the fantasy campaign. The supers game took a life of its own and we just kept playing. It was a lot of fun, but I was afraid we had left the fantasy game cool off too much.

2013 proved me wrong! Despite my initial hesitation, refocusing the game, advancing the timeline a year, new antagonists and challenges, it all reinvigorated the game. We had an awesome time playing, and we are currently in high level territory. All characters are level 16th or 17th, with massively complex battles, and despite all the prep time, as a GM, I love it! We are coming to the last few months of the campaign.

Change was a constant this year in my gaming group. Two of my three longest regular players, Pierre and Luis A., left the group for personal reason this year. They’ve been a cornerstone of the group for 20 years. The third, José, had left back in 2012. They are all well and missed, we remain friends, and they drop by every now and then, but other responsibilities keep them from the game. I totally understand, but it changes the dynamic of the group. We made that change a positive thing!

Mind you, the group is not all new people; Luis L. has been a regular for 14 years now, Fernan and Carlos for about six, and I’ve known most of them for far longer than that. I am lucky in the fact that the people I game with are also my dear friends. Even the new arrivals!

We have some new blood in the group. A university student, who is also a gamer, approached me in early 2013 about visiting us and observing the game for an anthropology class. After feeling a little bit like the gorillas in Gorillas in the Mist, we welcomed her into the group. She ended up joining us as a regular, along with her boyfriend.

For the first time since I began gaming I had two females in my gaming group. I know female gamers are not uncommon in this day and age, but back when I began playing there were not many female gamers I knew. So thank you Sara and Mariana from bringing diversity to the group. Also Mariana and Edgardo brought a new perspective to the game. They are younger than the average member of the group and I really believe that for our hobby to continue, we need to bridge the generational divide and get young people gaming. I’m not saying they were not playing before, both played RPGs before joining us, but it is great having new young players with new and fresh ideas in the mix.

Sadly Mariana also left to study abroad, so we ended the year with six regular players, Carlos, Edgardo, Fernan, Hector, Luis A. and Sara. Let me thank them publicly for coming back week after week to the game and for putting up with my GMing!

When I crunch the numbers, my weekly group met a total of 44 times this year. I try to keep a 48 week schedule, accounting for some weeks off due to vacations or travel, but as complex as the year was I can’t complain, 44 sessions is a pretty decent number. Plus I ran games at the Puerto Rico Role Player’s Geeknics, a D&D game using the Rule Cyclopedia (you can read about it and see the characters here), ran the Savage Worlds Test Drive Wild Hunt adventure and the Pathfinder Beginner Box adventure again at the Central Fan Fest in Cidra, ran a free form horror game at the latest Geeknic before the year ended, and even got to play FATE as a player thanks to Jorge, aka Chino. So gaming was good this past year!

So what’s to come in 2014? The Pathfinder swashbuckling campaign is coming to an end. In the next couple of months we should be wrapping up that game and soon after that we’ll begin the Wanderers of the Outlands sci-fi campaign. Since I’ve been writing about that game almost as long as I’I’ve been blogging here, that fact that it’s finally happening is amazing. The game will use the Savage Worlds setting. The fact that the Sci-Fi Companion is coming out soon is just a happy coincidence!

After that I will most than likely return to my homebrewed fantasy campaign, I’ve been running regular in it since 1993, so it’s unlikely I’ll abandon it. Some players have expressed a desire to play some OSR games, even maybe run a Mystara game using the Grand Duchy of Karameikos as a setting. (Which happens to be half-off it’s regular price as I write this post!) I also want to run a spy game inspired by the Archer TV series, less tongue in cheek but in the same vein, using the awesome Cover Ops by DWD Studios.

In 2013 we had a special holiday dinner where most of the regular players, and a few guests, came along with their significant others; we had a great time and even did some in-character freeform role-playing for the Pathfinder campaign. I would love to do this again this year. Maybe run some special games for certain occasions. Halloween comes to mind, I definitely want to run a follow up to my zombie game from 2012.

I also want to run a special Savage Worlds sci-fi game at some local stores to show people what Savage Worlds is all about. I want to run FATE as well, probably at a convention or a Geeknic, and to finally play Numenera and Dread (this one has been on the back burner for a long time!). Maybe even get to paint some Bones before all the Bones II miniatures arrive! (A friend painted my Cthulhu mini so they are not ALL unpainted, you can see below, thanks Braulio!)

I’m looking forward to some Kickstarters that I’ve backed arriving in the coming year, specially the World of Calidar. I’m a big fan of Bruce Heard and this may be a way to satisfy my players that want to play in Mystara by exploring this new world.

I hope to once again be an active contributor to the blog, go to more cons to share my love of gaming with others, organize more activities with Puerto Rico Role Players, and maybe a few other surprises. All that and maybe start a PHD! We’ll see…

Thanks for reading. What are your plans for 2014? I want to know. Tell me on the comments!