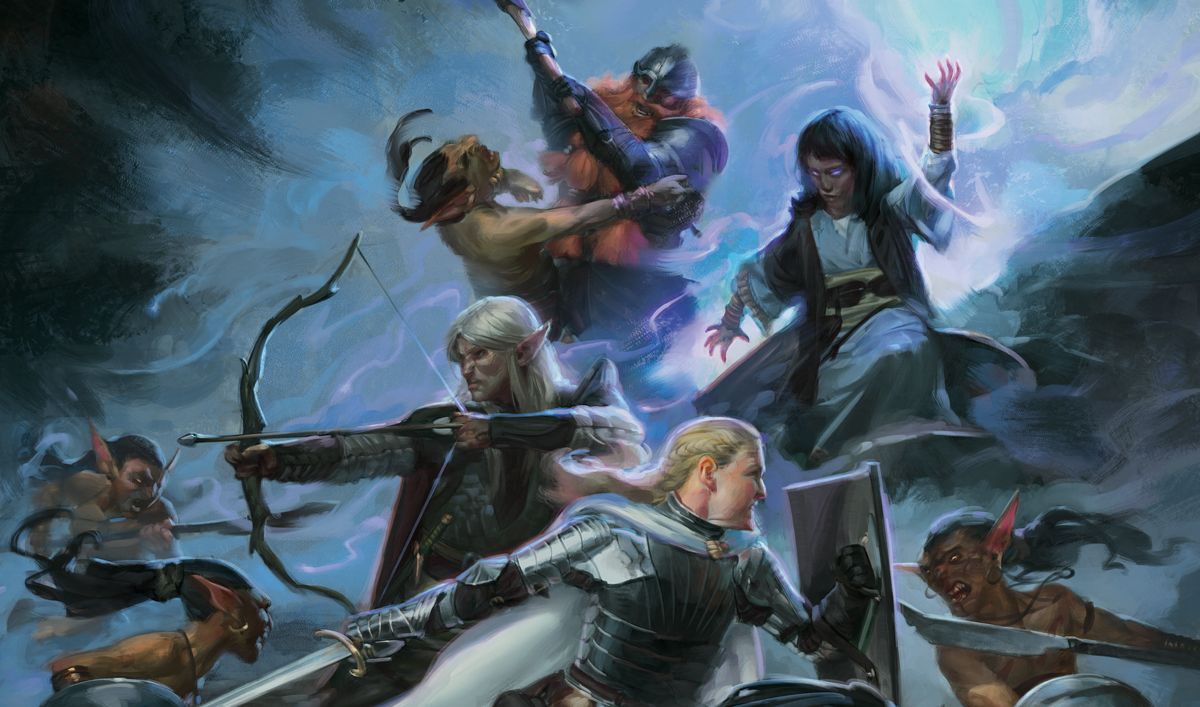 When I had a look at the first public playtest documents Wizards of the Coast released of then-called “D&D Next” I was cautiously optimistic. But over time I lost interest in the game. I still thought that Wizards was on the right track, but I was just not convinced that they would be able to excite me. Then came the ridiculously cheap Starter Set. It was just a great deal, I couldn’t ignore it. But still my excitement was pretty low.

Things changed when a friend offered to run the adventure included in the Starter Set for us. I looked over the pregenerated characters and immediately picked the Dwarf Cleric. I loved the idea that he was more of a soldier or mercenary than a priest and that he was wondering if the gods actually cared for the world. This totally blew my mind. A pregenerated character for the new D&D with some interesting ideas and a background ripe with roleplaying opportunities – that was something I hadn’t expected.

Since we only have two players in our party, the DM ran a short introductory adventure for us to help us level up a bit before we ventured forth. I was surprised how well the rules worked. The game definitely feels like D&D but is much lighter rules-wise than the last two editions. But it didn’t feel overly simplistic. For me it felt like a combination of the best elements from OD&D, D&D 3E and D&D 4E. The spell casters’ cantrips are now basically at-will powers like in D&D 4E. Rituals are back – which I love – and feats are more like talents in other games. Each feat is actually something cool your character can do instead of just being a +2 bonus to a skill roll. One of my favorite mechanics in D&D 5E is definitely the advantage/disadvantage mechanic. It’s simple and effective and if I am not mistaken is similar to a +5/+5 bonus but with no math involved.

I recently got the new PHB and it totally blew me away. The artwork is probably the best I’ve seen in a D&D product. It not just looks great but WotC also made sure that there’s much more diversity in the archetypes shown. The times of bikini chainmails and an all white cast are obviously over. I was also surprised that there was finally a section in the book that explained how roleplaying works. And I am overjoyed to see that the new D&D actively supports roleplaying. Especially backgrounds are a cool addition to the game and will help new and veteran players to come up with interesting characters.

All (or at least most of) the classic classes and races make their comeback. The available races are human, elf, dwarf, gnome, halfng, tiefling, dragonborn, as well as half-orc and half-elf. In most cases you have to pick one of several sub-races and even the Drow are available from the start. The available classes are the fighter, rogue, wizard, cleric, monk, paladin, ranger, warlock, barbarian and sorcerer. All of the classes allow various playstyles and don’t feel shoe-horned into any roles like in 4E. I was especially excited to see that the PHB now allows players to make interesting choices for their characters pretty early on in their career. So can fighers choose between several martial archetypes including one of my favorites – the eldritch knight. This is no review, so I won’t go into more detail here.

Overall I like the new D&D a lot. There are a lot of things it does right. The rules feel like D&D but are definitely streamlined and overhauled. A lot of the elements in the book harken back to older times but still retain a modern feel. For the first time in years I am actually thinking about running a D&D game again. I haven’t had the time to read the rules thoroughly yet, but my first impression is way better than I anticipated a couple of months ago.

Last but not least I want to talk about the D&D Basic rules. The one thing that will probably help D&D more than anything to get into the limelight again is the availability of a free and pretty complete ruleset in the form of the ever-evolving D&D Basic rules. Basically it’s possible now to run a game of D&D 5E from level 1 to 20 just using the material freely available from WotC. If you want more options in your game you can buy the PHB (and other products), but you’re not forced to. I am pretty sure that a lot of people will use the Basic rules to try the game out and if they like what they see, get the PHB as well. The Starter Set also fits neatly into that strategy. The adventure included is long enough to get you hooked and wanting for more.

I have to admit I was extremely skeptic about D&D 5E at first. The playtest gave me some cautious optimism, but failed to rekindle my excitement. But I have to say that playing the game changed my view of the game almost completely. We had a lot of fun and the mechanics work great and never felt in the way of having a good time. Heck, I am actually thinking about running D&D again.

Dust and Mirrors: A soundtrack for Night’s Black Agents