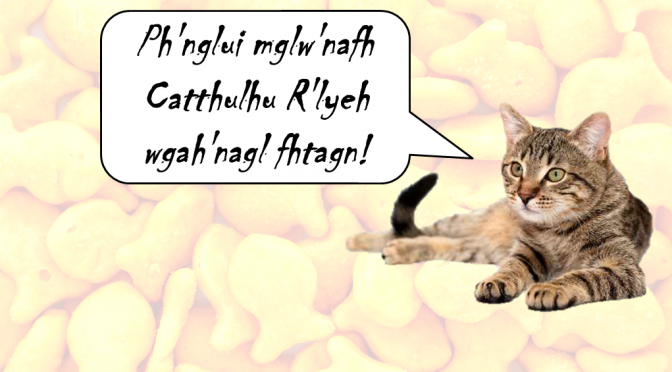 I’m rarely a player these days, and I’m not complaining. My gaming time is limited, and what I enjoy the most is being a GM, so I usually only get to be a player at the Puerto Rico Role Player Geeknics. But this week, for our weekly Tuesday game night we were going to be two players short so I decided to take a break and ask one of my players to run a Call of Catthulhu session for the group! 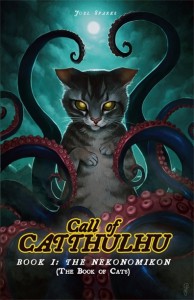 Mariana is one of the newest members of our group (mind you she began playing with us over two years ago, but she had a prolonged hiatus due to her studies), she along with her S.O. are the new blood to our gaming retinue. She had already run a Call of Catthulhu session I had missed due to work, but I had heard such great things about it from my friends that I could not pass up the opportunity to play.

I’m a cat lover, so a game where you get to play a cat, protecting the unsuspecting humans from the dangers of the chaos of other animal cults (and I’m paraphrasing form the description at their website) already has me sold on the idea. The game itself is very simple, narrative focused, creating your cat is a breeze and the archetypes and task resolution are elegant and very in keeping with the topic. Our Cat herder, Mariana, had some cute cat dice the added to the ambiance, and she had a rule that is we made her “awwww…” with our cat cuteness we’d get a treat that we could use for a reroll. We got actual goldfish crackers as treats, miau! 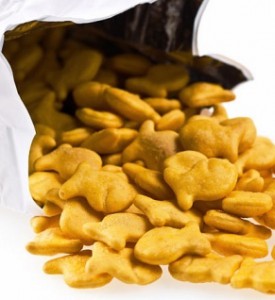 The session was a continuation from a previous session, so Sir Catington (Luis), Hamlet (Fernan) and Shadow (Edgardo) had to deal with the new cats in town Fetish (Hector) and me, Morphy. I was actually playing a version of my cat in the game. I believe I got the spirit of my cat down.

As a GM, sorry, Cat Herder, Mariana really created a very vivid and fun location with meaningful NPCs that really brought the setting to life, and boy, did she need to herd her cats! I think we all embraced our feline alter egos and really went all over the place, as cats ought to do, and she handled it with aplomb. When the session was over she told us that she had envisioned the session very differently, but if she hadn’t told us, she would have fooled me. She rolled with the punched, improvised and ran a one of most fun games I’ve been lucky enough to be a player in a long time. Kudos to the Cat Herder!

If you like rule light games, and the idea of playing a cat intrigues you, make sure to give this game a try. And before you dismiss it as a gimmick game, as much fun as I had and as much as I laughed, Mariana managed to make the game feel creepy and the stakes real, this felt like an adventure game through and through. I’m sure it’s a combination of a good game with a terrific GM.

Before I go, let me share with you a one page write up about Morphy I provided the Cat Herder with so she knew his personality when planning how to integrate him to the game. Creating his for the game was a cinch based on this. Hope you enjoy it!

The Cold War and the Cthulhu Mythos

The Mythos Is Everywhere