Allow me to quote the Dark Lord of the Sith…

August 4: What is the most impressive thing that you can remember another player’s character doing in a session?

There have been many impressive moments in our many campaigns through the years, I’ve been lucky to have creative, amazing players who never cease to amaze me. There are many impressive moments, even epic ones, but there is one that just comes to the forefront when thinking about such things. Let’s call it the Portable Hold in the Bag of Holding Incident!

During our last D&D 3.5 campaign in 2007 the players faced an antagonist named Terr Sotor. He was actually a minor NPC from the previous campaign that escaped and became a powerful crime lord with ties to extra-planar allies, powerful fiendish creatures at his beck and call, and a permanent torn on the character’s side. Their first encounter was at low level, 5th I believe, they had heard of this mysterious crime lord, and full of hubris they had decided to face him head on. It was a disaster, characters died, the survivors had to run with their tail between their legs, and they made a permanent enemy that day.

They encountered Terr Sotor or his agents through the campaign, playing a game of cat and mouse through much of it. Much later and at a higher level Terr Sotor was ready for his final gambit and a lone player went to face him. Fitzroy Pale was a character played by a great player, a longtime and dear friend, Luis Manuel Alvarado. Fitzroy was a combat beast; min-maxed with a plethora of classes and prestige classes, optimized feat selection; a whirling dancing storm of death in the battle field. But an interesting character! Luis is one of those players who’ll min and max and still play an engaging fully fleshed out character, not easy feat and a testament to his skill as a gamer and a role player.

Still Fitzroy wandered off to face Terr Sotor on his own, his hideout filled to the brim with powerful magical and extra-planar evil creatures. As powerful as Fitzroy was there was no way he was taking on this army of malevolence! He strode defiantly up to Terr Sotor who smiled knowing he had the upper hand. I can’t remember right now why they met; it’s scribbled down on my campaign notes somewhere. But there, face to face with his enemy Fitzroy put a portable hole inside his bag of holding!

Some of you know what happens in such cases… For those of you asking, what happened? Let me quote from The Hypertext D20 SRD: “If a portable hole is placed within a bag of holding, it opens a gate to the Astral Plane: The hole, the bag, and any creatures within a 10-foot radius are drawn there, destroying the portable hole and bag of holding in the process.”

I didn’t expect this to say the least! To this day I don’t know how long Luis had been planning this, but it threw a wrench into my adventure I didn’t expect. I sat there flabbergasted for a moment, looked at him, and smiled! I love when players throw me a curve ball. Both Fitzroy and Terr Sotor were sucked into the Astral Plane and fought each other in an epic toe to toe battle that ended with Fitzroy defeating their longtime enemy!

That is one of the most impressive things out of many any player has pulled in any of my games. Well played Luis well played…

Here is what Fitzroy Pale looked like in the campaign; Luis based his look on that of Michael Demiurgos a character from DC Comics’ Lucifer comic book. 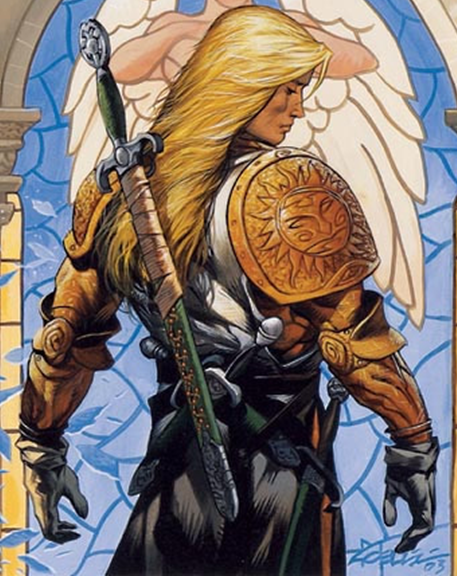 So what’s the most impressive thing you remember another player doing? Blog, tweet, post or simply leave a message here and keep #RPGaDay 2016 going. Until tomorrow!