Contact is one of the few roleplaying games created in Germany who eventually were released in English language. I have to admit I totally missed the release of the English PDF on DriveThruRPG probably because I had owned a hardcopy of the German version for quite a while now. The PDF on which this first look post is based on, was provided by the publisher. Thanks again, Patric!

So, what is Contact about?
Contact is a roleplaying game set into a near future, where aliens have started invading Earth. The players are part of OMEGA – an organization tasked with fighting the alien threat. Yes, this sounds a lot like the premise of the XCOM computer game series, and no, it’s not a coincidence. The author of Contact, Robert Hamberger, is a huge fan of the XCOM games and an avid role-playing gamer, who worked for many years to bring his vision to life: an XCOM-inspired pen & paper RPG.

A beautiful book!
The result is a 290-paged PDF (or book – the Kickstarter to fund the printing of hardbound books is still running) with gorgeous artwork and a percentile dice-based rules system which feels a lot like the mechanics ripped straight from a computer game. These mechanics may very well be what makes or breaks the game depending on what you prefer. I have to admit that especially combat in CONTACT has way too many fiddly bits for my tastes, but I might not be among the game’s target audience. If you love complex tactical combat in your RPGs you might love Contact. 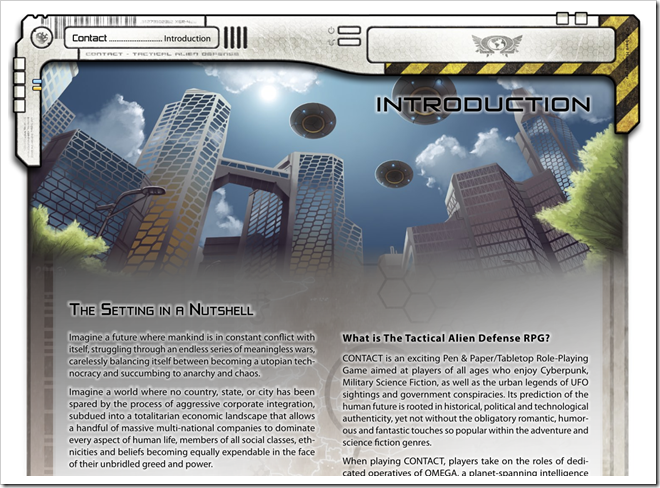 The first 33 pages of the book contain background information about the world in the 2040s, OMEGA, and what kind of characters you can play in the game. The next 70 pages or so are the rules needed to play the game (including normal and Advanced Combat rules, Vehicle Combat, Character Creation, etc.). The remaining pages contain the Gamemaster section, an extensive equipment list, a bestiary, and a Base Management Simulation. Yes, CONTACT even let’s you customize your OMEGA bases.

Since this is not meant to be a full-blown review, I will focus on a few aspects of the game I deem important. If you are interested in a better understanding of the mechanics, I recommend having a look at the free quickstart rules.

Did I mention that it looks awesome?
One point I can’t stress often enough is that the game is looking awesome. The artwork has a pretty strong anime vibe, and in my opinion is a pretty good fit. The layout is pretty clear but not what I’d call printer-friendly. It looks great on a screen but some of the page backgrounds might mess with readability especially if you use a black-and-white printer. 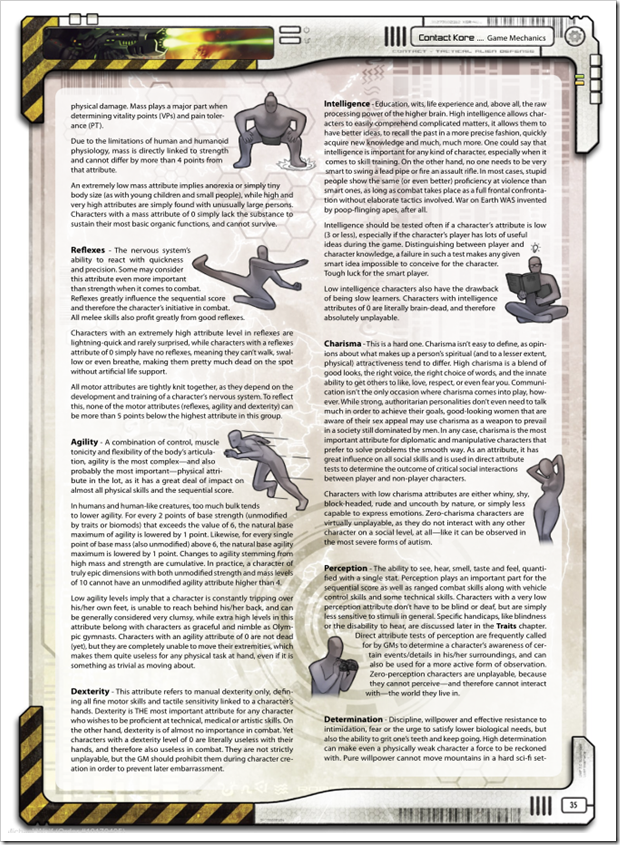 I especially love those details like you can see in the picture above. It’s obvious a lot of attention to detail went into the layout of the game. This is especially astonishing since the whole game was written and layouted by the author himself. From what I know he even created some of the artwork. Wow!

Does this game really need a House Keeping skill?
Overall the rules remind me of a Runequest derivative. The attributes (of which there are ten) are usually ranked from 0 to 10, skills are ranked from 0 to a maximum of 200%. The base values for each skill are based on the character’s attributes. The base value for Primitive Ranged Weapons is 20% + (Strength)/2 + (Dexterity)/2 + (Perception) for example. I am not sure if such a level of detail is actually needed. But I guess this is probably a matter of taste. I am also not entirely sure why a game in which you kill aliens and take their stuff needs a House Keeping skill, but I digress.

Luckily the skill list is not overly long. There are 30 separate skills, of which are most combat or vehicle-related. In addition to skills the characters can also pick from an extensive list of advantageous, disadvantageous and balanced traits. Oh, I think I should mention that CONTACT uses a point-based character creation, which allows you to tailor your character as you say fit. Some of the traits actually reminded me a lot of the perks in the Fallout games, so XCOM was perhaps not the only influence on Contact.

Way too crunchy for my tastes
Combat in CONTACT works a bit different than in the XCOM computer games. Each character has a set number of action points (APs). These APs are spent when moving, performing actions, and the like. In the XCOM games each character could spend all their APs before the next person acted. In CONTACT the character with the highest AP acts. Let’s say Character A has 10 APs and Character B has 15 APs. So B acts first and decides to walk 3 yards which costs 6 APs. This reduces B’s APs to 9, so it’s A’s turn. A then readies a weapon which costs 2 APs. A’s current APs are now 8, so it’s B’s turn again. I guess this system might work, but it involves a bit too much bookkeeping and table-checking for my tastes.

Overall the combat rules have a lot of fiddly bits I am not too fond of, but if you prefer a more detailed and crunchy ruleset, you’ll notice that Contact actually has rules for almost any situation. There are even rules for underwater combat!

More rules…
The Rules Appendix contains optional rules for vehicular combat, chems, toxins, skill perks, psi powers, and more. The Species Appendix contains rules for optional character species. One example of an optional species are the Children of Mu (see the blue-haired girl in the above image). The CoM are obviously genetically-engineered and all-female.  They are slightly better than normal humans when attribute values are concerned but CoM characters have less options available to them. Aside from the CoM you can also create robot characters and canine companions. Woof!

Base building and the GM
The gamemastering sections contains a few general tips on running roleplaying games and gives an example how a CONTACT campaign may be structured. The book’s bestiary (called Alien Database) contains highly-detailed descriptions of a couple of alien species. Surprisingly the aliens are not cardboard copies of XCOM aliens. It seems a few of them were even inspired by H.P. Lovecraft’s creations. I don’t want to go into too much details here, since encountering weird aliens is part of the fun.

The Base Management Simulation is a very cool idea in theory, but on paper it reads more like a lot of book-keeping. Again, this is an aspect of the game which will appeal to a certain audience, which I am obviously not a part of. Nevertheless I can appreciate what the author tried to do and I have to admit the level of detail is again astonishing. If you want to include Base Management Simulation in your campaign, the rules provide you with a framework which allows you to pursue research projects, recruit staff, build extensions to the base, sell salvaged alien tech, and more.

Stuff!
The rest of the book (almost 100 pages) contains an extensive “Equipment Database”, a multi-paged index, and the various sheets needed to play Contact.

Conclusion
I have to admit I am a bit torn when it comes to CONTACT. The game is definitely a labor of love. It looks great and it looks as if it should work well enough (I haven’t played it yet). The setting is a bit generic, but workable. The premise is awesome, and probably the main reason why most people have picked it up. But it’s definitely not a rules-light system. The core rules aren’t actually that complex, but there are a lot of options, traits, rules for special circumstances, etc. which you have to keep in mind. If you are not intimidated by this, you should definitely give CONTACT a chance. The PDF version is currently available at DriveThruRPG. There’s also a Kickstarter project running right now which is supposed to finance print copies of the game. Check it out!