I was quite excited when I recently read the Critical Hits post titled, “D&D 4e: The New Player’s Option.” In the post written by Bartoneus it was discovered that Wizards of the Coast will be putting out a new Dungeons & Dragons book called Player’s Option: Heroes of Shadow that will allow players to play as the Assassin, Necromancer, and Hexblade classes available in March 2011. The book is also said to contain additional races, but I have not yet had any success in finding any information on them. 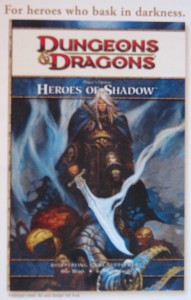 Based on the information provided by Bartoneus, the book is said to be 320 pages long with a reduced physical size of 6″x9″ and a cost of only $19.95. This is so oddly strange to me that it is almost enough to make me think the whole book is nothing more then a badly written rumor. However, my desire and dream to own a Players Hand Book that contains an Assassins class continues to hope this release is true.

The first Player’s Hand Book was only 320 pages long so I find it hard to believe a book with that many pages would be shrunk down and made into a paper back book. That is something Wizards of the Coast has ever done before.  A book with all the normal art we have come to expect from a Dungeons & Dragons 4th edition book sold at $19.95 also does not make sense. It does not seem like that price point is high enough to recoup production costs.

Personally, I was upset when Wizards of the Coast announced the Assassin class was to be a Dungeons & Dragons Insider exclusive option only.  One of the biggest reasons why I like Dungeons & Dragons is because it is a pen and paper based game.  By it’s nature, there should be no need to pay for a subscription service to allow you to play a particular class or race.

Roughly a year and half will have passed when Player’s Option: Heroes of Shadow is finally released in March of 2011.  Wizards of the Coast must be thinking that whatever revenue they would have gotten from people signing up for Dungeons & Dragons Insider exclusive Assassin class has already been made, so now they will release a new book with the Assassins class and two other classes.  This will result in Dungeons & Dragons obtaining money from people who did not previously sign up for the exclusive as well as them getting more money from the people who had signed up and would now like access to the two additional classes.  I believe when companies release products like this it is often referred to as, “Double Dipping.” You see that a lot with DVDs.