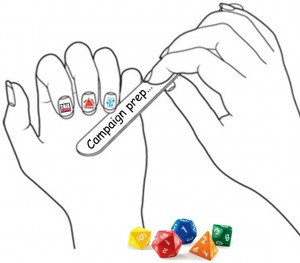 If you follow me on twitter (@sunglar) or read my recent posts about Breaking the D20 Paradigm you may know I am struggling to find a system for a future sci-fi game (pun intended). While the game may be some time away, anywhere from 10 months to a year, I like to plan ahead and I want to work on a campaign knowing what the system can handle. I know the argument can be made that the system is irrelevant to the story but I like to be a little bit more pragmatic and know the strengths and limitations of the rules I’ll be working with.

Also, many of my players like some crunch in their game, and as a GM I like some myself, so the idea of going too indie or experimental, while maybe appropriate for a one shot, will not work for a long term campaign. To add to the complications I want to homebrew. I am not playing a pre-existing setting, but instead creating a new campaign.

I have become a fan of reskinning. I had done it before without using the term, repurposing spells or monsters for an alternate effect in AD&D and D&D 4th edition with its simplicity and the ease for doing this really brought the point home and I have integrated what I learned about reskinning playing D&D 4th edition in my Pathfinder campaign and even more in Mutants & Mastermind, which has proven incredibly easy to reskin with.

Thinking about possible sci-fi RPGs and reskinkning has led me down another train of thought. Repurposing systems to play another type of game, I won’t call it reskinning since it’s a larger endeavor, in extreme cases its redressing the system to support a different genre that the rules were intended for. I call it filing off the serial numbers.

I have done it before; I once used RIFTS to play a homebrewed fantasy game and used the same OCCs, the equipments, but described it all in different ways. A good friend and longtime fellow player used AD&D to play Mutant Chronicles, and I tried to use Mutants & Masterminds 1st edition to play a sci-fi game… As you can see I have struggled with sci-fi games before.

Since I aim to please and some of my players have inquired about the possibility of adapting the Star Wars Saga System to a generic sci-fi game, I feel compelled to at least consider it. I posted about this on twitter and got some great feedback. The easiest one: call the Jedi psychics and move on. I don’t what to keep the laser sword wielding monks around, even if I were to call them Cheddar Monks (shout out to the excellent Darths & Droids webcomic), and some have suggested to simply drop Jedi but keep the skill (Use the Force) and the feats to gain powers, thus allowing any of the other classes to gain “powers”. I would also need to weed out certain powers that may be to over the top for traditional (i.e. stereotypical) sci-fi psychics. I have been working over ideas for the past couple of days…

With all this in mind I come to you dear readers. I played Star Wars Saga System for about seven months, but this was back in 2008. Some of our readers may have more experience with the system. What are your house rules and your fixes to the system? Any thoughts on filing off the serial numbers… Anyone adapted it to other settings? I know about the fantasy and horror/pulp adaptations. What else is out there?

I know there are generic or easily adaptable systems out there, GURPS and Savage Worlds to name just two, but I want to explore the feasibility of the adaptation they have suggested. Your thoughts and ideas are appreciated. I hope everyone has a great week!

PS – I was unaware of this use of the filing of the serial numbers concept; still the concept works for the purposes of this post so I’ll go with it. Here hoping no one is terribly confused!