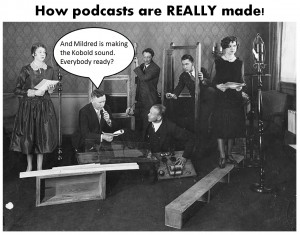 Podcasts and me, it’s a relatively new affair. Despite being an avid radio listener (and I listen to AM talk radio so I’m used to the crazies! Mind you AM radio is different from what I gather it’s like in the US, there are still lots of character but different political views seem better represented) I didn’t make the transition to podcasts until recently. That doesn’t mean I was unaware of them, just not interested.

Before I had a smart phone I had downloaded and listened to the odd podcast, mainly something featured in an internet post, and the first gaming podcast I ever listened to was Fear the Boot and it was their first Ryan Dancey interview. I downloaded a few more episodes, but listening to them on the laptop didn’t work for me, I always had something else to listen to. When I got my smart phone I began to explore the podcasting options out there.

The first one that really got me was The Lost Podcast with Jay and Jack. I was really into it for a while, but with the bad taste the end of the series left in my mouth (let this be a lesson to you, never lick your TV, no matter how good the series is!) I quickly stopped listening, they have some other themed podcasts but they never caught my fancy.

Then I dipped my toe into gaming podcasts when I joined a gym and once again began to listen to Fear the Boot. Alas going to the gym didn’t last too long, and neither did my podcast listening days! Flash-forward a couple of years and in the middle of the hectic year I’m having podcasts have made it back into my life.

The first tentative steps were taken with This Just In… From Gen Con. But recently I’ve been traveling a lot for work, spending almost two hours on the road (yeah it’s a LOT to me, that’s island living for you!) every day; after a couple of days talk radio seemed to be regurgitating the same topics so I decided to dive back into podcasts, and I am so glad I did.

Since I’ve been writing for the blog I’ve discovered many fine podcasts and through the blog and social media I have been lucky enough to interact with some of the fine podcasters out there.  In a way it’s a different perspective…. So what have I been listening to? Glad you asked!

No D&D for you, if you are serving life