As I’ve written last week, I doubt I will get my NaGa DeMon project done. Today is November 28th and Astronauts is far from being playable. But since it’s a very interesting project I hope to finish it over the next months. I don’t play to hurry things but instead I want to work on it until I am happy with the result.

I also promised you a first look on what I’ve done so far. So here’s an excerpt from my manuscript: 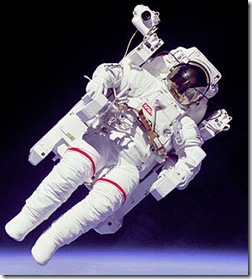 Astronauts uses a simple dice pool mechanic to determine if actions attempted by characters are successful or not. Astronauts uses two kinds of six-sided dice: Skill dice (blue) and Complication dice (black). The blue dice represent the character’s skills and any favorable conditions that may help the character. Black dice represent anything that hinders success. Whenever it’s unsure whether a task at hand may fail or not, the dice pool is assembled. The pool starts with one Skill die. For each character trait helping in that situation another Skill die is added. The GM then may add additional Skill dice if there are favorable conditions making the task even easier. Then the Complication dice are added. Stress, unfavorable conditions, sometimes even trust issues between the characters can account for that.

This core mechanic is actually pretty close to which I came up for another unfinished project, but I like it a lot, that’s why it makes a reappearance here. To put the mechanics into a bit more perspective, let me share another excerpt:

Each player in Astronauts plays one member of a team of astronauts on a mission of human space exploration. The scope of said mission is up to the players and the GM. But we’ll talk about Missions later.

Characters in Astronauts are described by Traits. Each trait is a word or a short sentence that describes different aspects of a character, what makes the character stand out. Player characters use the following Traits:

I have a few more things to share with you, but this should suffice at the moment. Please let me know what you think. Your feedback is highly appreciated!