I have to admit I always had trouble with preparing my games. Back in the day I usually wrote down lots of stuff, tried to prepare for every situation, drew maps, fleshed out even minor characters and in the end I still felt things were not working too great. Nowadays I almost do no prep at all and try to rely on my improvisation skills alone. But this can be pretty much hit or miss. When I am in a good mood, things work perfectly smooth, but when I am not, the game goes downhill pretty fast. I definitely need to work on my prep style and that’s where Never Unprepared comes into play.

The book contains three sections which build on each other. In the first section “Understanding Prep”, Phil takes a closer look at what prep actually is. I was actually surprised that there’s more to prep than I initially thought! In the second section called “Prep Toolbox” we get some handy guidelines to create our own personal prep template. Last but not least section three, “Evolving your Style”, Phil talks about how we can evolve our styles and adapt it to new games and technologies. 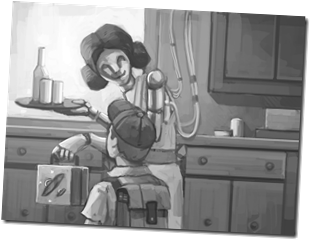 Especially when I read through the first chapter of section one called “Prep is Not a Four-Letter Word” (which is an awesome chapter title, by the way) I realized that prep is something we definitely don’t talk about often enough. It’s as if prep is that weird redneck cousin everyone avoids at family reunions. But it’s one of the most important parts of being a GM. As Phil put it, being prepared is like having a “Backup GM” you can ask whenever you get stuck.

When he lists the most common mistakes people make when preparing games I felt like someone looked over my shoulders for many years. I am sure I made all of these mistakes and I still make the – in my humble opinion – worst of all which is ignoring my own creative cycle and schedule. I’ve canceled more than one session just because I couldn’t get any prep work done because of that. You may think that you already know everything there is to know about prep, but trust me reading someone else’s words on the matter can give you a new perspective on things.

I could now start listing examples of Phil’s advice but this would probably be way beyond the scope of this preview. What I like about the way the book is organized is that Phil managed to divide prep work into several phases that he then tackles separately. He also points out common mistakes and provides us with tips on how to get around those issues. And at the end of each section there’s a Rate Your Skill Level page that allows you to do some introspection.

Section Two, called “Prep Toolbox” was another eye opener for me. It never occurred to me to create a free time inventory, so that I know how much “free” time I actually have. Phil later goes even further by creating a personal creativity heat map and even a Creativity Energy Graph. I have to admit that’s a bit too much for me, but I agree that you should at least think about those issues. Finding the right time to do things is extremely important!

Phil also gives some great advice on how to steal more time. You can still do some brainstorming while on the car or while waiting for the bus. Heck, some of my best ideas I had under the shower! Of course you can’t write down your notes while driving your car or under the shower, but as Phil said, there’s always a right time to do certain phases of prep. 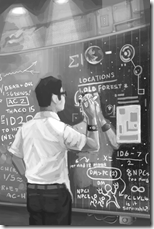 Section Three, dubbed “Evolving Your Style”, is actually my favorite. The groundwork has been laid and now we can start evolving. One of the first steps according to Phil is to identify your strengths and weaknesses. When you know what your strength are you know where you don’t have to prepare all that much. The weaknesses are where your focus should lie. Luckily Never Unprepared provides you with several examples on how to do that. Another highlight of the book is what Phil calls “The Prep-Lite Approach”. The approach is basically the result of him going onto a quest to reduce his prep time when he realized that being a husband and a father reduced his free time significantly. Prep-Lite might not work for everyone, but it’s interesting to read how someone else has solved the issue.

I definitely applaud the way Phil talks about this quest. He openly gives examples from his own life and the book contains several short articles titled “True Story”. Advice books often have the tendency to talk down to the reader. This is different in Never Unprepared. You rather feel like you’re a member of Phil’s party while he’s on his year-long quest to slay the Dragon which is game preparation! In a way, it’s a much more personal book than you would expect. And if you ask me, that’s part of its charm.

Let’s now have a look at the physical product itself (if you can call a PDF a “physical” product). The book has about 127 pages and has a very clear and friendly layout much like the other Engine Publishing products. The artwork in the book is of a high quality, even though it’s black-and-white. The book comes with a full index and the final PDF will be fully hyperlinked and bookmarked.

Preorders will start on June 4th and I wholeheartedly recommend this book to every GM! And by the way, if you now got interested in Masks and Eureka, feel free to check out my reviews here and here. And now I need to seriously think about how I do my game prep…

P.S.: I would like to thank Martin Ralya for providing me with a prerelease copy and Phil Vecchione for writing such a great book! Thanks, guys!