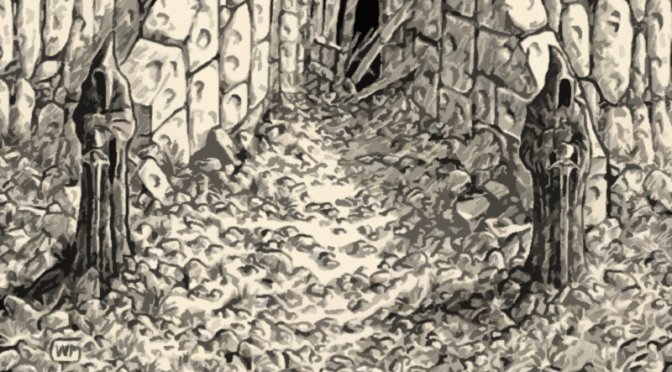 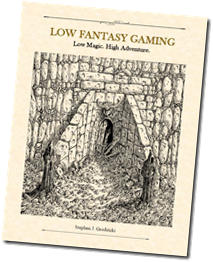 In one of my previous posts I have confessed my new-found love in all things OSR. All those D&D simulacra available are full of cool ideas, an old-school charm, and a wonderful sense of nostalgia. But what I like the most is that – even though the rules all these works are based on are quite old – they just work great.

Nowadays you can also easily find a D&D-style game tailored to your liking. One of these games is SJ Grodzicki’s Low Fantasy Gaming (or LFG for short). What it sets apart from other OD&D-like games is it’s low-fantasy approach (hence the name) and a couple of interesting new mechanics.

Instead of a large number of classes you only get five: Barbarians, Bard, Fighter, Rogue, and Magic-user. The maximum level is limited to 12 so that the most powerful spells are beyond reach of the player characters. This also makes sure that even at maximum level there are more than enough adversaries the GM can send against the players. 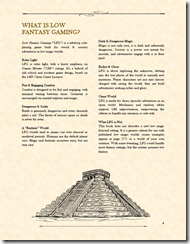 Instead of Wisdom LFG characters have the attributes of Perception and Willpower, which is in my opinion a very interesting choice. This also makes it easier to make a weak-willed but perceptive character or vice versa which wasn’t possible in classic D&D. Another interesting change is that LFG uses the attribute bonuses from D&D 3rd Edition and later. This makes your attributes more important than in most other OSR-style roleplaying games.

Luck is a totally new mechanic which replaces Saves. Wow, this is a big one! Your character’s Luck starts with 10+half your level (rounded up). Each time you normally would do a Save roll, you now do a Luck save which is successful when the result of a d20 comes up with less or equal your Luck value.

Thing get more interesting when you decide to press your luck. The table (GM and players) are to come up with interesting uses for that. When you do a Luck check you try to roll equal or under your Luck attribute but this time if successful, you not only saved your hide, BUT Luck is reduced by one. This means if you keep pressing your Luck it will run out. IMHO it’s an extremely cool idea to add Luck as an additional resource.

The classes are also quite diffeent from standard OD&D fare. Characters in LFG get skills, and a variety of interesting abilities every level up to tenth level. So levelling up usually means more than just adjusting your hitpoints. The skill system is pretty easy and just adds +1 to attribute checks. Attribute checks basically work like the Luck save explained above. If you are no fan of skills I am sure you could easily throw the mechanic out without breaking the game. Personally I don’t mind skills especially if the system is as simple and straightforward as in this case.

Another new mechanic is the Reroll pool which allows you to reroll failed attribute checks. Each adventurer starts the adventure with one reroll pool die per level. This can be used to then reroll checks and regenerate during rests. This reroll can be used if the character had a related skill to the action they tried to perform or if the action had a close connection to the character’s background.

The magic system in LFG is another aspect of the game that sets its apart from the competition. Magic is a fickle thing and each time a magic-user casts a spell, things may go wrong (which is called a Dark & Dangerous effect). Each time a spell is cast you roll a d20. If the result is a natural 20 disaster strikes. If not, the chance of something going amiss increases by 1 and so on. This only resets at the end of the adventure or when a Dark & Dangerous effect occurs. Results like “All plant life within 60 ft withers and dies.” are actually among the more mild results. This also causes your character’s Luck to decrease by one! This really makes you think twice about using magic at every opportunity.

Did I mention that LFG also features a complete Madness system? Yes, in LFG your character can go mad like a hatter. The longer I read LFG the more it reminds me of something like Warhammer Fantasy Roleplay but with D&D-style rules. Sure, it doesn’t have WFRP’s fancy career system, but it shares a lot of its tropes from the dangerous magic to characters going mad or being corrupted by magic. The book also features quite a few creatures who fit perfectly into this.

There’s a lot more to tell about LFG, but I guess it would be beyond the scope of this post. LFG is definitely one of the more unique OD&D-style games out there and it supports a slightly different play style than most. Another highlight of the game is the artwork. I’m pretty sure I’ve seen a couple of images before, so it might be mostly stock art, but it was nicely put together and definitely supports the old-school vibe of the game. The layout is a simple two-columned one – nothing special – but it’s definitely easy to read. LFG contains everything you need to run a successful low-fantasy campaign. There’s even a dungeon room generator, rules on aerial or underwater combat, and an extensive bestiary. What more could you wish for?

The PDF version of LFG is actually available for free from the original website. There’s also a hardbound POD edition from Lulu which sets you back mere $22 plus shipping. If you are looking from a slightly different OSR experience make sure you give LFG a chance.