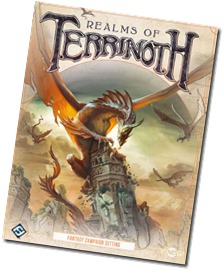 After I decided to cancel my D&D game, one of the players immediately offered to run a “Realms of Terrinoth” game for us. “Realms of Terrinoth” is the first in the line of settings for Fantasy Flight Games’ Genesys Roleplaying System. Genesys is the generic variant of the system they’ve used for their Star Wars roleplaying game line. He followed my advice and opted to start things slow. We’ll use pregenerated characters for a one-shot, and if we all enjoy the game, we might continue to play.

In preparation of the Realms of Terrinoth game I studied the Genesys rules over the weekend, and the more I read, the more I got excited about the system. I’ve played Edge of the Empire for quite some time now, and even though I was skeptical at the beginning, I grew quite fond of the system. It’s not too complex and there are guidelines for creating your own adversaries, weapons and armor. The rules also give examples for various settings. It looks like it could be a homebrewer’s dream.

I have several setting outlines on my hard drive that I always wanted to develop further, but finding a fitting setting was often an issue. Sure, GURPS works with everything, but I find it too unwieldy. I’ve thought about the Cypher System, but I find it easier to design a setting tailored to this system than the other way around. Arion Games’ Advanced Fighting Fantasy 2nd Edition and its sci-fi counterpart Stellar Adventures are extremely easy to hack, but probably also a bit too light for anything more long-term. Genesys – in my humble opinion – hits a sweet spot between the narrative and the mechanics and is also a system a lot of my friends are already familiar with.

Since I am not in the GM’s seat at the moment, I can spend my time preparing a possible future game. Sometimes I just love preparing for a campaign, write up a setting, just for the fun of it. I still remember fondly the work I put into a Fallout conversion for Fudge. I only used it once, but it was so much fun! Three ideas I’ve had brewing for a while are

These are just three ideas from among countless others which have been simmering in my head for quite a while. I think the best thing I can do is just pick one and start working on it. I don’t think I need a 1000-paged campaign bible, but a dozens pages of notes and a few guidelines on how to make it work with Genesys should suffice. At this point I don’t mind if I never get to run it, I don’t mind if it’s not the most unique and creative thing I could come up with. I want to create something just for the heck of it – and not because I feel pressured because I have to run something next week.

Genesys and the End of the Year

2 thoughts on “I’ve got Genesys on my mind”