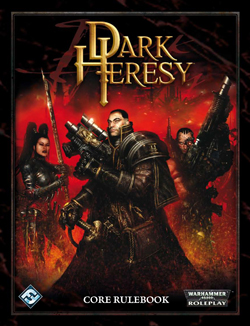 Christmas is over and it’s time to make plans for New Year’s Eve. This year we are not having a big party (if I ever had a big party at New Year’s Eve) but some friends will come over to play “Dark Heresy” (Video review). I have ordered my copy as soon as it was out but we hadn’t found an opportunity to try it out. So this is our chance.

Initially I planned to run “Monte Cook’s World of Darkness” (Video review), but between digesting the Christmas goose and watching Doctor Who episodes I just couldn’t get my head around some of the more complex rules. And most members of my group have already played Warhammer Fantasy Roleplay, so the transition to Dark Heresy shouldn’t be such a big step.

I am currently preparing one of the introductory adventures and I really hope my group will like it so we can expand it into a fully fledged campaign. I have always loved the Warhammer 40,000 setting and in my opinion Dark Heresy could be a lot of fun for the players and the GM alike.