Today fellow blogger VulcanStev has setup “The Magical Gnome“, a Play-by-Post forum, where you can host and join PbP games. The site was created using the the NING social network service, so the site does not only allow you to play PbP games, you have also all the features of a fully-fledged social network. If you are interested sign up here! 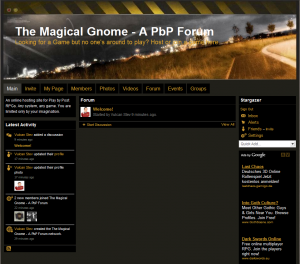 I have to admit I haven’t played in any PbP game before, but I am looking forward to trying it out. So, if you are interested, you really should check this site out!