I believe in a couple of post I came across much like a grumpy grognard who attacks everything new and is clinging to the good old times. But actually I am very open to new things and always on the search for the next cool game out there. I am not someone who has stuck to one particular game for decades, I ran and played dozens of different RPGs and there are always a couple of titles I am very excited about. 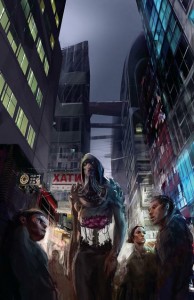 Eclipse Phase is an upcoming game from Posthuman Studios and published by Catalyst Game Labs. The official site actually manages to describe the game pretty well in a single sentence: “Eclipse Phase is a pen & paper roleplaying game of post-apocalyptic transhuman conspiracy and horror.” I think when you read this you actually have a pretty good idea of what the game is about. And from what I’ve seen so far, it looks pretty cool (at least when the campaign setting is concerned). But what makes the game even more interesting that Eclipse Phase will probably the first commercial game that actually fully embraces Creative Commons. The game rules and the setting will be released under the CC Attribution Non-Commercial Share-Alike 3.0 license. That’s pretty good news especially for everyone who want to write his own stuff based on that game and post it on the internet. I wish other companies would make it as easy.

The 400-paged core rulebook shall be out this summer and is supposed to cost around 50 bucks.

When a couple of years ago Black Industries announced a series of roleplaying games based on the Warhammer 40,000 franchise I was overjoyed. I am a big fan of Warhammer and 40K and the lack of a 40K RPG bothered me for quite some time. The first part of the series was Dark Heresy, which was praised by gamers and critics alike. In the meantime Games Workshop licensed their RPG lines over to Fantasy Flight Games. FFG is currently working on Rogue Trader. Rogue Trader will be mechanically pretty close to Dark Heresy but focus on another aspect of the Warhammer 40,000 universe. In this game you actually play a Rogue Trader and his closest counsellors. Rogue Traders are more or less privateers that plunder and profit in the name of the Imperium of Man.
I know from Dark Heresy that we can expect very high production values and pretty solid rules from Rogue Trader. And the setting may be even more interesting, since in Dark Heresy the focus of the setting was too human-centric if you ask me. In Rogue Trader you will probably get a better feeling for what this huge setting has to offer. The upcoming core book will probably set you back approx. $60.

Dresden Files RPG
This upcoming RPG is based on the novel series by Jim Butcher. I believe a lot of you already know the series or have watched the TV adaption, so I don’t go into detail here, but I think it’s sufficient to say that the Dresden Files RPG is a game of modern fantasy (and perhaps even horror) which plays in a version of the modern world where magic is real and supernatural creatures stalk the living. Harry Dresden is one of those people who try to “carve out his little corner of sanity in the world”. I haven’t read the books but I’ve watched several episodes of the TV series and the background sounds intruiging.
What makes everything a bit more interesting is the fact that the game is developed by the guys from Evil Hat Productions and will use an updated version of the FATE rules. You can read more about the game at the official website/blog.

Ok, this is no RPG but a tactical boardgame by Catalyst Game Labs. Here’s an excerpt from the original site:

Leviathans is a game in development by Catalyst Game Labs that simulates combat between warships that have taken to the air in an alternate history 1910. The king leviathans, the battleships, are the largest vessels. Maneuvering in support are the smaller ships of light cruisers, destroyers, and others ships. Will you captain your fleet for king and country, expanding your nation’s power and becoming legend? Or will you fall from the sky, forgotten?

From what I’ve seen so far this might be a pretty cool game which instantly reminded me of some FASA titles like Crimson Skies or the Renegade Legion games. And since I am a fan of flying ships of all kinds, they had me at “warships that have taken to the air“. The world of Leviathans may also make an interesting background for roleplaying games, don’t you think?

What are the upcoming games you are currently the most excited about? Please let us know in the comments below!