Recently I stumbled upon an article that gives sex advice written by D&D gamers. The article is a bit unclear on who has asked the questions and who were the person (or persons) answering, but it’s a funny read nevertheless. But I would have loved to read more about the background to that post. Here’s one of my favorite pieces of advice:

My girlfriend and I have been together five years, and things are getting a little boring. We’ve been thinking about role-playing to spice things up. Is this a good idea?
If we’re talking about the intersection of D&D and sex, it is my firm opinion that that kind of role-playing has no place in the bedroom. Leave Arakos the Dragonslayer at the table. Also, dice in bed would probably be a bit like walking on legos; those d4s are basically caltrops. On the other hand, if you leave the DM’s Guide on the shelf and break out the skimpy costumes, you could be in for a good time. If you play D&D, you have great experience for getting in character — but you can’t rely on rolling a twenty for a good performance. Sorry. You have to do the work yourself.

To get more advice, head over to nerve and check out “Sex Advice From Dungeons & Dragons Players”.

This reminds me of a running gag in Phil Foglio’s “What’s New?” comic: 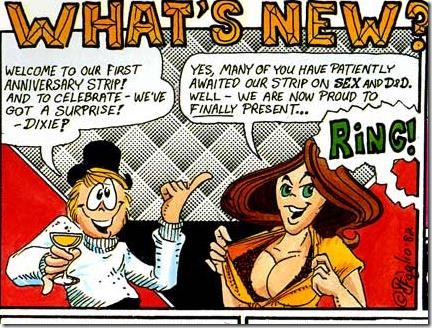 By the way, you can read all about the adventures of Phil and Dixie online now. Check this site out! Enjoy!