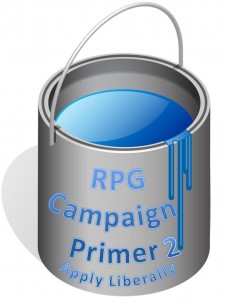 Now that I’ve started writing about this I can’t stop. Here is the thing, on a previous post I was musing about the “campaign primer”, the way to introduce your campaign to your prospective players, inspired by Shinobicow’s excellent series on World Building.

In his series, specifically Part 8 he talks about this and touches upon the elevator speech, or elevator pitch, call it what you may. And I think this is particularly appropriate, the idea is to communicate the “value proposition”, in layman’s terms, why this campaign is right for you! Having worked in sales I can understand the value of this type of communication. Precise, succinct, to the point, and there is something to be said for getting your point across in a distilled form. It forces you to take a hard look at the campaign and reduce it to its salient features.

Of course, being creative types who have (probably) worked on this campaign for hours upon hours, you want to share every exciting detail with the players. My advice, be patient, there will be time for this. If you indulge my digression here for a moment, patience is also a valuable skill for a Game Master. In our modern “instant gratification” culture we want all the excitement and we want it right now, but if you pace yourself, set up plots and introduce information little by little not only will you have the satisfaction when it all comes together down the line, but you will keep your players engrossed and interested, coming back to your game for more.

But back to the task at hand, how do we apply this to the campaign primer. Ok let me recapitulate from the last post and give some structure to this:

1. Be concise! – Don’t drown players in information. If you must prepare hand-outs try the one page idea. Limit yourself to one single page handout per session. I normally try to prepare a slightly larger introduction to a campaign, a mix of history, rumors and set up for the first couple of sessions, and try to pace myself handing out information in small manageable chunks. This is a relatively new technique for me, and I have not used it all the time, but I believe it works. Normally the one page handouts have no illustration or fancy fonts, the idea is to share the most important information and get it out of the way. 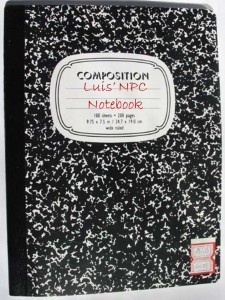 2. A picture is worth a thousand words – I have said it in other posts and I think it bears repeating. We are visual creatures and when you can show an image of a place or an NPC the players grasp the idea quicker. My biggest problem is when I write and create and then spend hours scourging books and the internet looking for the image to represent just what I have in mind. You know an easy solution for this? Find the image first! We may not have the budget for art departments or to hire big name artists, but we can burrow their art and use it. I am not advocating piracy, or using any art for profit without paying the artist. All I am saying is to use it privately for your game to show exactly what you have in mind.

I remember a friend who, in the olden days before the internet was everywhere (well almost) would cut images from magazines, newspapers, textbooks and glue them on a composition notebook. He then would write the names of his campaign’s NPCs under each picture. No information, no stats write up, just the name and the picture. He would pass it around and we would spend hours looking at the NPCs. Likewise I would use the collectible cards sets of famous artists printed in the early 90’s, and the old AD&D trading cards, to represent NPCs, places or events. I would put them in trading card pages and then label each according to what it was. At a point the collection became quiet large. I still have the scanned images of all those cards.

3. It’s all in the presentation – I am well aware that the mere mention of Power Point may send shivers down the spines of some of our readers. If you have been victim to endless presentations with slides filled with text that the presenter, professor, salesman, whoever it may be, just reads in monotone, I understand your trepidation. But Power Point can be a powerful tool. It has become so prevalent that almost everybody will know what Power Point is. Don’t want to spend money on the program? There are options like Open Office you may explore. 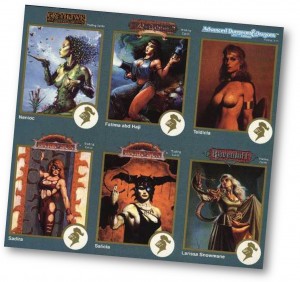 My advice, use Power Point to illustrate what you are talking about. Select an appropriate and evocative background, set up a format and use lots of images. Remember point 2 on this list. I usually write a title, place various images and write small captions under them. I have used them to present NPCs, pahtheons, even illustrate adventures like I said in the previous post.  We live in a multimedia world; engage all your player’s senses!

4. “The dungeons are alive with the sound of slaying!” (with respect to Miss Andrews) – One of our readers, symatt, wrote a comment on the previous Campaign Primer post about using audio files to tell some of the stories of your game, having others speak different voices. I like the idea, but don’t have the equipment to produce the audio drama playing my in head. I simply may not have done proper research, but I like the idea. Another use of audio can be the campaign soundtrack. Michael has written some excellent posts about music for games before, and while for many years I was reluctant to use music in my games, now I am a convert and play music on my games to set the mood.

But on this instance I am not talking about music FOR the game, but music BEFORE the game, the Campaign Soundtrack idea! In our day and age it’s easy to burn a CD with a playlist; share existing playlists from your music devices, or create online collections. I have NOT done this yet but I plan to prepare one for when we retake our Pathfinder swashbuckling campaign. Simply put its collection of music appropriate for the setting, taken from movie and game soundtracks, some ambient sounds, classical music and music of specific cultures. Using the music of certain real world cultures to illustrate the music of a region or a culture in your game gives your players another mental short cut to associate with specific details from your campaign.

Let’s say that in the campaign soundtrack you identify, for example, a track of Russian folk music (like this one) as the typical music of a region in your campaign. When your players visit that place during the game, you can play that track and the players will associate what they heard in the soundtrack with what’s happening in the game and you’ll have reinforced another detail that makes your game come alive. Avoid music that is commonly known to your players unless you want to create a sense of familiarity.

Use specific pieces from existing soundtracks for NPCs or events, referring to them as the King’s March or the Dirge for the Battle of the Haunted Pass in the campaign soundtrack. Then when PCs visit the King’s court or travel to Haunted Pass you can play the music for added effect. I avoid well known soundtracks, like Conan or Lord of the Rings, they may be fine to set the mood during the game, but if they are too well known they will never be YOUR campaign’s music. Explore distant cultures and languages that sound foreign and exotic. For example, in my campaign the elven language sounds like Quechua. To illustrate what is sounds like I played Yma Sumac to my players. You can hear some of her music here. It may not sound like your idea of what elven sounds like and that is exactly the point! And of course there is this video:

And this brings me to my last point…

5. “Video killed the GM star!” – I remember a client back when I worked at my FLGS who used to tell me stories about the games he would run (people telling gaming stories in stores, ludicrous I know!) and how he would show clips of movies for events and NPCs. The BBEG of his campaign was the “Lord of Darkness” from the movie Legend (Tim Curry as the BBEG, there is an idea). While I’m reluctant to just lift random clips from famous movies, as some are just too well know to gamers, I have used animations for alien landscapes, or clips from games to illustrate locations. This is perhaps the idea I have used the least, but it can be ideal for certain genres, like sci-fi, or if you play games based on movies or TV series this can be a powerful tool.

When we began playing our Pathfinder swashbuckling campaign I got together with my players to watch Treasure Island. Sadly I could not get the original Disney movie, so we watched Simbad movies instead. It might not have been exactly about the campaign, but it set the tone, they served as a primer to the type of game we would play.

Those are just five points you can take into account when you create your campaign primer. And I haven’t talked about tools such as Wikis, Blogs, I feel like there is a lot more ground to cover. I may just need to revisit this topic again.

Remember it doesn’t have to be all in paper, we can so do much more! I hope some of this may be of use to you. Please share your ideas of what you do for your game’s campaign primer, how you introduce your campaigns to your players. I’d sure like to know…

Games I am excited about: 2018 Edition