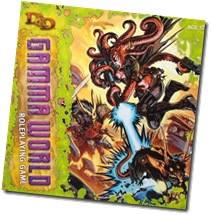 9 thoughts on “Ask The Readers: Tell me about Gamma World!”