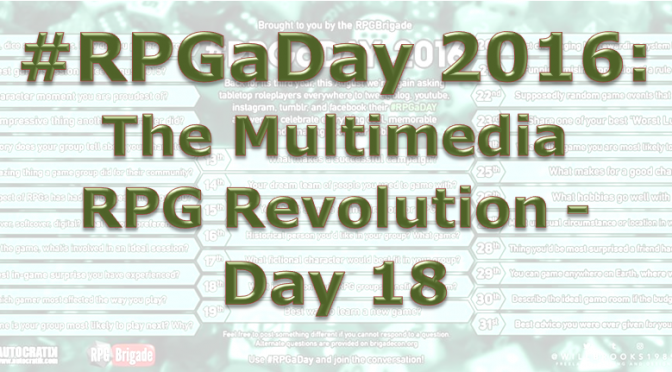 This is more like it, a topic that gets my creative juices flowing! The question for today as part of the #RPGaDay 2016 challenge coincidentally plays off a conversation I was having online a few days ago with a friend. The question reads thusly:

August 18: What innovation could RPG groups gain the most benefit from?

The explanation on the site goes into greater detail: “Whether it is technological, related to game mechanics, or to social dynamics, what could best help improve the play experience?” I think a benefit for the games we play and how we learn them would be embracing the multimedia experience and tools available to us. Let me explain what I mean.

It used to be that to learn a game we’d buy the books, read them, play with our friends to figure out the intricacies of the rules, if there was a FLGS we could visit maybe we’d learn about the game there. Gaming magazine helped sometimes, but it always came back to the rules. Despite the decades and advances, it still remains a matter of the printed rules in most instances. Books have become more accessible, easier to use, better illustrated, but the sheer amount of rules and reading is still a barrier of entry for many when it comes to RPGs.

I’ve recently begun to play more board games regularly. Family members have become interested in them so all of a sudden there are game nights not having to do with an RPG. Incredibly, when I get a new board game, I don’t read the instructions first. I typically go to YouTube and watch a video showing how to play. I eventually go to the rules, for additional clarifications, extra details, but the way I learn the games has changed. Some board games even have apps that help to run the game! The actual play podcasts and videos, the advice shows, the reviews on YouTube, show that people gravitate to these videos and podcasts when learning about the rules of role playing games as well.

I can hear it now, “Heretic! There is no substitute for reading the rules. Not all advice shows get the rules right.” And that’s correct, because these are dense, often lengthy rulebooks, parceled out into bits of advice by fans. But what if a ruleset was designed to embrace the medium? The designer creating the videos, parceling out information through short videos, audio files, and the printed material more a reference sheet, a crib sheet, than an actual rulebook. Just imagine!

This new 21st century RPG rule set works something like this… you subscribe to the game on the publisher’s website. This grants you access to the reference files for characters and actions, every player can download an app that directs you to audio and video files online that explain mechanics, actions and powers specific to your character and general system rules. Those needing a visual component, or introducing some lore, are videos; other more general explanations a small audio file or a simple animation file. The game master has similar tools, and since this is a digital subscription new and updated content can be pushed out regularly. Some bits can be free to the general public to generate interest, other reside behind a paywall to generate revenue for the creators. 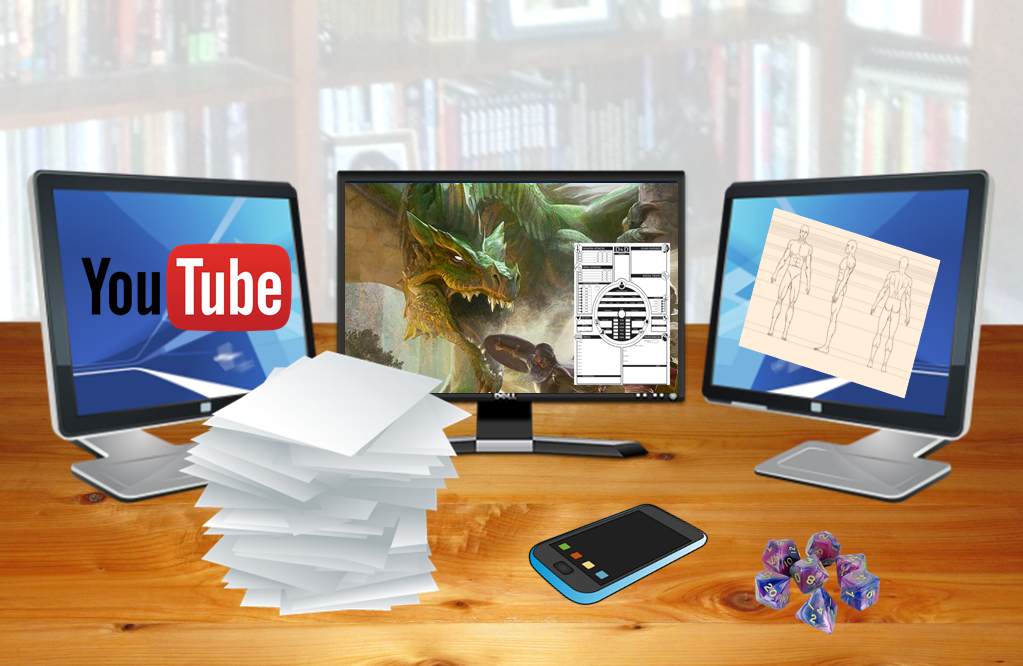 I’m no proposing a new app to play, this is a game you sit around a table to play, but you just learn the rules differently. Of course with such technological integration you could extrapolate and many of these tools could probably be seamlessly integrated into online platforms, but what I’m proposing is still a tabletop RPG, just presented in a new way. And heck there may still be rulebooks for those set in their ways, but learning a system is achieved through a plethora of mediums, people undoubtedly learn in a variety of ways, and this would make games accessible to many new gamers!

Just like comics and broadcasting are slowly changing with the times, so could role playing games!

What do you think? Is this a pipedream? Is it something that’s already being done and I’m just too out of the loop to know it? Let us know what you think in the comments. Thanks for reading, see you all tomorrow.