About two years and a half ago (can’t believe I’ve been blogging here for that long) I wrote a post about the then new game I was playing, Mutants & Masterminds, and I wrote about the tools I was using then for the campaign. They included an Excel sheet for character creation, a campaign Facebook group, so on and so forth. Here is the link for the post. As time has gone by I have only expanded the electronic tools I’m using…

I’m also gone FULL digital. I run all my games from my computer. This is facilitated that my current campaign is a Pathfinder RPG game and there are some excellent resources that allow me to run the game from my computer with minimal book look up, including first and foremost the Pathfinder Reference Document by Paizo and the Pathfinder SRD (which also has SRD for Swords & Wizardry, Heroes of the Modern Path, i.e. a modern version of Pathfinder, and d20 Hero SRD which is the SRD for Mutants & Masterminds).

I’ve developed my own tools to use in my games, Excel sheets for tracking experience points, Power Point presentations to share information, and I’ve embraced PDFs. If available I’ll get PDF copies of the games I’m running. The price of some PDFs can still be a stumbling block. Paizo has very reasonably prices PDFs of their core Pathfinder books, most are $10.00. Pinnacle has their Savage Worlds Deluxe Explorers Edition, both in PDF and print, available for $9.99, that’s a price you can’t beat for a full game. Green Ronin Mutants & Masterminds / DC adventures PDFs are double the price of the other books, but I love their system so much I’ll get them anyway. And I usually get physical books as well and Green Ronin has some nice pre-order prices where you get the PDF at a discounted price.

As I worked on the Pathfinder swashbuckling game I developed a Google Sites page for the game, and did the same for a very short zombie game (which I posted about here and here). However more and more I am using Facebook for my campaigns. I realize the social media giant has lost a lot of love out there, but the fact is ALL my players are there and use it regularly, so it’s become the most convenient way to share information. The files options in Facebook groups, the ability to create them privately, and the ease of sharing campaign images via the pictures and picture albums, have replaced my Google sites.  I currently have four campaign groups, one for my current fantasy game, another for my past supers game and for the zombie game, and another for the next game, our sci-fi campaign.

I have not ended my love for Google mind you! I still use Google Drive to share some documents and collaborate with my players and friends, most notably the Pathfinder campaign experience points. I add each session’s award to a Google Docs spreadsheet and the PC’s check it to see when they level up. They are not even writing down their XP anymore.

How to handle music in my games has been an ongoing battle. I went from no music, to carrying around a CD case with all the soundtracks I used for my games, to creating playlists in my iPod. What I’ve begun to do recently is create playlists on YouTube. There are a LOT of videos for game and movie soundtracks and I just pull them in appropriate playlists and play at my games. Or try, I forge oftentimes, but that’s my new thing. For example here are the playlists for my current Pathfinder swashbuckling game, and for my upcoming Wanderers of the Outlands sci-fi game. 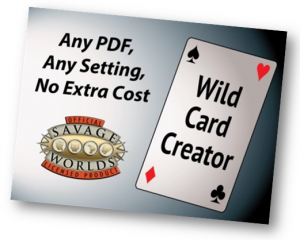 One last thing… For the Wanderers of the Outlands campaign we’ll be using Savage Worlds and I intend to use Journeyman Games’ Wild Card Creator, since I backed the Kickstarter.

So that’s the state of technology in my game. I wonder; what tools are my fellow gamers and readers of this blog using? Anything you’d like to share? I’m always looking for new tools!