In case the banner picture at the top of the post didn’t give it away, the game I’ve played the most in my life is Dungeons & Dragons. I remember seeing this ad in a comic even before playing the game. 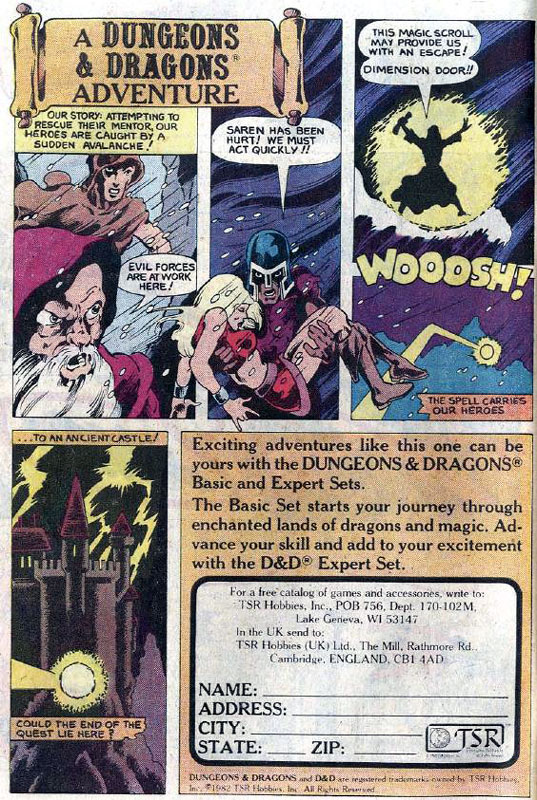 Over the past 31 years I’ve played one version or another of the game for most of that time. Not just the different editions, and variations such as Pathfinder or Microlite20, but systems derived from the D20 mechanic, D20 Modern, Mutants & Masterminds, Star Wars Saga System.

This doesn’t mean I don’t appreciate other games. I played a lot of Rifts, Heroes Unlimited (ok both are not that far off from AD&D but still), Alternity, BESM (Both the dX version and Silver Age Sentinels), some WoD and myriad other games here and there. I

I really like Savage Worlds! My next system to play will more than likely be the Cypher System. Having played a Powered by the Apocalypse game recently I really want to try running one. I’m even tinkering with a system myself (how many times have I said that!).  But still if you add up all the time together, and ignoring the variations, D&D come out on top. I’m currently playing a D&D 5th edition game.

I think D&D is going to be around for a while. And that’s ok! We have a long time together, and besides, it seems we almost just got back together after the 4th edition breakup! Don’t judge me, let me enjoy it.

Don’t forget to check out the videos by  Desde la Fosa  on our YouTube channel. If you speak Spanish swing by. If you don’t, we still appreciate a share with gamers you know who might enjoy it. Today’s video is by Aníbal Delgado:

So, what’s this game for you? Looking forward to your comments.