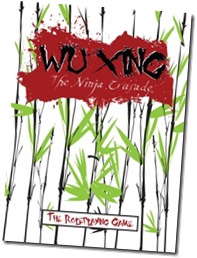 Third Eye Games’  Eloy Lasanta let me know that there will be a couple of Wu Xing-related giveaways this month. I have to admit I haven’t looked into Wu Xing myself, but I thought this might be of interest to our readers. I am currently reading Third Eye Games’ Apocalypse Prevention Inc. and I am enjoying what I’ve read so far. Expect a review in the near future.

So here’s what you can get for free from Third Eye Games this month:

For detail, please check out this post on the official site! Good luck!